I noticed a headline on Drudge today that seemed like it needed to be read with breathless enthusiasm, like phony newscasters would for a political story:

250 scientists!  Surely this means something right?

It means "something" in the sense that it's a complete sentence.  It could simply mean that 250 scientists are essentially saying, "give me grant money to study this".

The article leads with a quote by Jerry Phillips, a Colorado Springs biochemistry professor.  Professor Phillips goes on to single out the Apple wireless ear phones called Air Pods,


“My concern for AirPods is that their placement in the ear canal exposes tissues in the head to relatively high levels of radio-frequency radiation,” ... He mentions tumors and other conditions associated with abnormal cell functioning as some of the potential risks. These risks are not restricted to AirPods. Existing evidence “indicates potential concerns for human health and development from all technologies that operate at radio frequencies,” he says.

What stands out to me is that while the AirPods are indeed in your ear, and they communicate with your iDevice by radio, they're using a protocol called Bluetooth Low Energy, also known by BLE.  As the name implies, it's designed to be a lower transmitter power than regular Bluetooth (already a low power, Pico Area Network protocol) which limits range but enhances battery life.  The physical protocol is for a transmitter running from 10 to 500 milliwatts, or 10 to +27 dBm (decibels with respect to a milliwatt) in the same frequency spectrum as WiFi.  The "full power" Bluetooth will double the power of the output, raising it to 1Watt or +30 dBm, at the cost of reducing battery life.  Frankly, by the discussion on that Wiki page, it doesn't seem BLE will buy you much compared to conventional Bluetooth.

The real question here isn't what the power level is, it's whether or not 10 or 500mW near your ear is dangerous.  RF safety is a pretty big and contentious subject.  Way back in 2011, I put down a lot of thoughts on the subject, but the short summary is that while there are many, many accusations that RF causes all sorts of injuries, cancers or other problems, the only effect that everyone agrees upon is that it causes heating - which is the mechanism that causes damage.  We all know that - didn't Robin Williams joke about putting "Mr. Hamster in the microwave oven" in the '70s?  That translates to saying you can directly substitute the 10 or 500 mW radio field for a 10 or 500 mW heater.

Over the last half year or so of my career, I became the default guy to go to with questions about RF safety.  I reviewed what the US, the European Union, Canada, and Australia had for their RF safety limits.  In general, the US limits are about typical of everyone.  There are a couple of countries in the European Union who reject the EU limits and impose limits about 1/10 of those but don't really justify it.  I will stick with the US limits here.  Excellent Canadian summary of many studies here (pdf).

The US has a safe exposure limit (for the general public) in the 2.4 GHz frequency range of .001 W per square centimeter; 1mW/sq.cm.  There are those who say that pulsed RF systems, which most are, are more dangerous than constant transmit power systems.  First, this can be accounted for in experimental design, with as simple an approach as basing power exposure calculations on peak powers, not average.  Second, the results of testing should tell you regardless of whether your meter is measuring peak or average power.  If they're testing with signal generators and aren't using pulses, then they're testing incorrectly.

I'm not going to say there's no confusion and no contradictory evidence, but trying to look at a big picture, I'll use a quote from the Medium article.


“There are many thousands of papers of varying quality and relevance to health that point in all sorts of directions,” says Kenneth Foster, a professor of bioengineering at the University of Pennsylvania who has studied the effects of wireless radiation on human health. While you could cherry pick data that paint Bluetooth and other wireless technologies in a scary light, “these arguments have no credibility,” he says.

Foster points out that the WHO and other public health organizations have analyzed the literature on Bluetooth and wireless tech and haven’t found “any clear evidence for health hazards at exposure levels below international limits.”

Looking at summaries of studies, the results are often conflicting and confusing.  It's commonplace for a study to show a health effect that disappears in subsequent studies, or appears and disappears in other studies seemingly at random.  An effect that always exists on the threshold of detection is likely to be statistical noise (or it could be a link to something that's in the environment and not controlled from one study to the other).

Do I think BLE AirPods are a problem?  No.  I've got to tell you that I'm not betting my life on that because I don't use AirPods.  In fact, I chose my current phone specifically because it's the last model that used a wired headset.  Not because of the RF, but because of $150 for AirPods vs. $15 for the wired version.  If I came across a set of AirPods, would I be concerned?  Not at all.

I'm going to conclude with conclusions from that Canadian research summary I linked to earlier.  If this is an eye chart, go to the source where you can download the pdf and read at any magnification you'd like.  The observant will notice their second to last point directly contradicts Professor  Phillips statement at the top of this piece that, existing evidence “indicates potential concerns for human health and development from all technologies that operate at radio frequencies.” 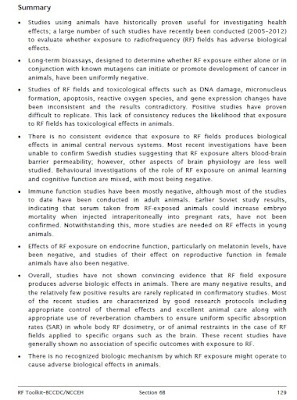