Drug Prices: It Takes Government to Really Screw Things Up

There's a meme going around the interwebz, apparently started by this Twitter user, Laura Marston who describes herself this way: "video game attorney, politics nerd, type 1 diabetes since 1996; I advocate for lower insulin prices in the United States" 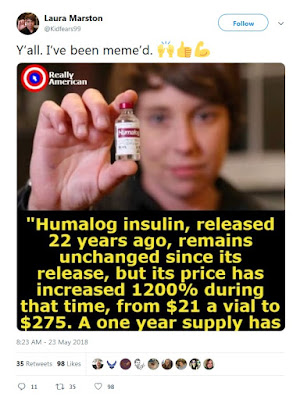 Long term readers know that I have no problem with "raging against the machine", but I regularly try to encourage readers the rage against the right machine.

This is another good example.  Ms. Marston thinks this is the fault of the drug companies, but they are using the system the Fed.gov set up for them to use.  Did the companies lobby the government to set up those laws?  Undoubtedly.  Absolutely.  That doesn't mean, however, that the congress critters couldn't have said, "hell no - you go pound sand".  The fact is, if they're obeying the law and the law is stupid, you have to start thinking stupid lawmakers are your problem.  The drug companies enlisted the FDA, the DEA, the FBI, customs and border security, and a dozen other taxpayer-funded regulatory and enforcement agencies to protect them from real competition with their willing, complicit help.

The details are from author Laura Williams writing for FEE (the Foundation for Economic Education) in "A Government Guide to Keeping Insulin Unaffordable: 3 Easy Steps to Hogtie a Market" and she does an excellent job of showing just how these laws have destroyed the market.


Even though insulin treatment itself can’t be patented, improvements in delivery mechanisms can be. These incremental improvements, no matter how small, can be used to extend the 20-year patent on a drug, a process called “patent evergreening.” Sanofi has filed 74 patent applications on its long-acting insulin Lantus—nearly all of them after the drug was on the market—and boxed out generics for decades. Drug makers seek extensions to their exclusivity when they add pill coatings and alter inactive ingredients, extending their monopoly but offering no marginal advantage to patients.

Regulators and pharma CEOs aren’t opposing forces; they’re the same people—sometimes literally. Nearly half of staff reviewers at the US Food and Drug Administration (FDA) will go on to take jobs in the industries they’re tasked with regulating, often as advisors in navigating regulatory policy.

Shades of how financial regulators are in a revolving door relationship with the companies they regulate.  The patent and regulations don't just keep out US competitors, they prevent non-US companies from exporting their insulin into the US.  Even if a factory makes the same insulin for both Canadian and US markets, the foreign maker is forbidden to sell to American patients.


The FDA almost famously drags its feet for years in the approval process.  That makes it practically impossible for small business innovators and researchers to "get into the game".  Faced with insurmountable costs they're likely to drop a new project or sell it to an existing giant with the legal staff to carry the load.

Any new drug must endure an FDA clinical trial and approval gauntlet that, according to independent reports, takes an average of 12 years and $2.7 billion to complete. Those costs must be paid by the manufacturer hoping to bring the drug to market, and only a handful of companies can raise enough.

It's worse than that.  Pay-for-delay settlements are an ugly consequence of a previous attempt to legislate lower drug prices. When smaller, generic manufacturers want to offer cheaper versions of a brand-name drug, its original maker will threaten costly litigation, which lower-margin producers can’t afford. Then they offer a way out, a “reverse settlement” by which name brands can (legally!) pay smaller companies not to bring a generic drug to market.

The hush money buys brands another few years of protection for their soaring profit margins. Insulin makers simply split the profits of their monopoly with anyone who tries to topple it.

First off, we see this sort of reaction from big companies in high tech.  It's why the largest Internet providers were behind "Net Neutrality" - they already have the staff of lawyers that smaller startup companies don't have.  It assures they'll never face real competition.  In this case it's raising the costs of getting drugs to market.  Keeping them high keeps the big companies on top.  The free market has been regulated out of existence.

The one that astounded me was that they could legally pay a smaller company not to bring a generic to market.  That helps the big company and the smaller one.  The FTC  (Federal Trade Commission - Protecting America's Consumers) claims they've "filed a number of lawsuits to stop these deals, and it supports legislation to end such “pay-for-delay” settlements."  It seems that by the essence of their mission statement, they should be able to stop these deals by themselves.

The final way applies to the entire healthcare sector:  Hide and Distort Prices so No One Can Shop Around


Patients, and indeed prescribers, have only the foggiest idea of what products are available and their real per-unit cost. Manufacturers like to boast that no one pays “list price”: Patients rely on a patchwork of health insurance, pharmacy discounts, and manufacturer rebates to bring the cost within reach. Such a complicated framework provides a wide scope for manipulation.

Prices paid by patients have risen steadily for a decade, but the price paid by health care actors has fallen. Pharma companies steeply discount the negotiated prices paid by pharmacies, benefits directors, and health insurers. Insulin is re-priced as many as four times other than the “list” price before it can be purchased by a consumer. At each stage, the reimbursement is based on a percentage of the list price. So the higher the list price, the better the returns for each participant in the process—even if no patient ever pays the list price.

Even shadier is the practice of offering steep discounts to insurance companies, benefits managers, prescribers, and other employees whose job is to decide (and limit) which insulin products covered patients can buy. Insurers and health plans pay a negotiated price well below the list cost but often well above what patients will pay. The difference, a percentage of that inflated list price, serves as a kickback from drug companies to anyone who will drive patients toward their priciest products. Class action lawsuits in Minnesota, New Jersey, Washington, and New Mexico are exposing the systematic manipulation of insulin prices by manufacturers, insurers, and pharmacies.

Through this nebulous network of bully tactics and insider dealings, government agencies and corporate campaign donors conspire to deny patients the benefits of market competition. Desperate patients pay up because they have nowhere else to go—and their distress is deliberate and designed.

If you read Denninger's Market Ticker, he talks about this regularly.  It's among the biggest problems screwing up medical costs: nobody knows what anything costs, and different buyers pay different prices.  There is no posted (or readable) price list.  That's starting to develop some cracks in its facade with some sites that allow you to research costs for some drugs, imaging or other tests, but we have a long way to go.

Step back and look at all three.  Does this picture look familiar to you?  It's nothing but pure cronyism, like we used to complain about when Obamanoids did it.  Did you think that would go away when we went from a D to an R?  Hah!  All that changes are the names getting the money.  The antidote for cronyism and higher insulin prices is not to increase the power of the government to regulate them, but to get rid of big government.