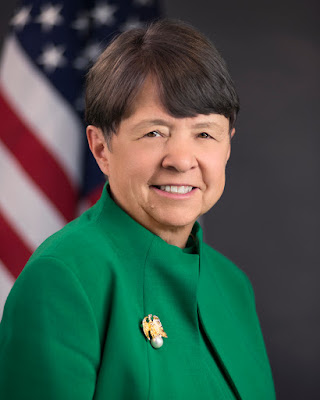 As that web page points out, Mary Jo White is the chairman of the Securities and Exchange Commission, appointed in 2013 by Barack Obama.  Actually, "was the chairman" is the proper tense because she left the agency upon Trump's inauguration and is now headed back to where she came from before she headed the SEC, the law firm of Debevoise & Plimpton, the New York-based law firm whose litigation department she previously headed.


“I got a call at 12:01 on Jan. 20, asking me to rejoin the firm,” said Ms. White, whose departure from the S.E.C. took effect that day. “And since I had a speech in San Diego, I used that time on planes to decide whether I wanted to practice law again.”

Wall Street on Parade puts it this way:


The news is also highly significant because it will mark the fourth time in four decades that Mary Jo White has spun through the revolving doors of Debevoise & Plimpton (where she represented serial law violators) to government service (prosecuting serial law violators).

If you're feeling dizzy, that's why it's called the revolving door.


One of her chief lieutenants in that effort, Andrew J. Ceresney, also rejoined Debevoise after serving with her as director of the S.E.C.’s division of enforcement.

I wonder if young Mr. Ceresney will be her successor in revolving the door between the SEC and Debevoise & Plimpton?  It's like the revolving door between the fed.gov and Goldman Sachs that led to them being referred to as Government Sachs.

For his part, President Trump has nominated Jay Clayton, a Wall Street lawyer from the firm Sullivan & Cromwell, to replace White.  Clayton, who has not had his confirmation hearing, is expected to push for less regulations easing the burden on IPOs and the disclosures involved.


He has already laid out a capital formation agenda to Trump surrogates who interviewed him, a source familiar with the process said. And he has expressed interest in tackling some regulations involving accounting and compliance procedures that financial industry players say get in the way of deals and initial public offerings.

The firm of Sullivan & Cromwell has defended some of the big (TBTF) banks but I don't see allegations he was involved personally.  It appears he has less of the cozy relationships than Mary Jo White with Debevoise & Plimpton, and less than the Government Sachs Employment Complex.