“Now, Witness the Power of This Fully Operational Death Star.”

Not really.  It's just that, “Now, witness the power of this fully operational CNC Mill.” didn't sound anywhere near as sexy.

As you might have gathered from yesterday's post being called “Preview”, I was potentially minutes from having it completely assembled and operational.  There have been a lot of days in this project where a task I thought was “a few minutes” turned into a few days, so I didn't want to say I'd show this today.  Those minutes were accomplished uneventfully this morning so that by noon, it was a fully operational death star CNC mill.

It's not Done done, but I think it's fully usable.  As I say in the video description, I now move from construction to optimization.  I've run all three axes for only a few minutes, and haven't cut any metal yet, but I think I could.  I debated doing some engraving or something today to record, but instead just recorded about five minutes of a machine warmup routine I wrote.  Even I found that too boring to watch, so I cut it down to about a minute and a half.  Heck, just watch the last 30 seconds.

On the plus side, I checked accuracy this afternoon, at least on the small scale.  When I tell the mill to move 0.100", it goes .100.  When I tell it to go 0.500, it goes 0.500.  Well, I can see what the QC guys call “ballscrew drunkenness” - a tendency for each turn to not be exactly the same length.  Mechanical engineering classes teach that a screw is an inclined plane, so think of it as lumpiness in that inclined plane.  Being accurate over half an inch means I swagged the scale for the machine sufficiently accurately for it to be OK for things smaller than an inch.  I will recheck that with a longer scale by using 6" calipers. 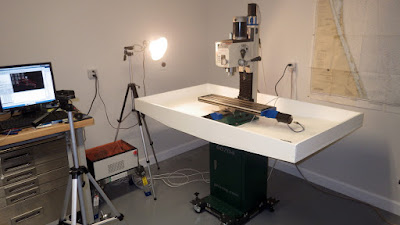 The mill's corner of the shop.

On the negative side, it has too much backlash.  The whole purpose of changing from the leadscrews in the mill to ballscrews was to reduce backlash to the smallest amounts I could get.  I measured over .010 on X and Y, with Z coming in at a more respectable .004.  I was hoping for .001 or .002 on all three.  Frankly, I'm kinda pissed at that.  I'm not exactly sure where to start looking for the cause.  It has the potential of making me pull things apart again.  (Do your best Sam Kinison voice and scream, “No!, NO!!, NOOOOOOO!!!!”).  Also on the negative side, I don't think I'm getting rapids as fast as Hoss says he gets.  Rapid movements aren't terribly important because you can't do any cutting at those speeds, but they cut your production time if you need to go back and forth a lot to make something.  The last moves in that video are done with a feed rate of 100 IPM, and while the LinuxCNC software interpolation partitions that speed between all the axes somehow, it's quite a bit faster than anything I can get on the Sherline.

Of course, in the total sense this is far from done.  The advantage is that for everything I do from now on, I have the big mill for help if I need to make parts and not just my micro mill.  Things to work on are to hook up the oiling harness (I have everything except the oil), the enclosure and the cooling system.  I had been considering flood coolant all along for this, but need to consider misting or other alternatives, before I go buy parts.

As for now, I'm just going to enjoy completing a long, long project.  Tomorrow's my birthday, so it's good day to celebrate.