Not Going as Smoothly As Hoped

I've been working on the enclosure for my mill since the post last Saturday, and it isn't exactly going effortlessly.  Smooth isn't a word that I'd use.  I spent a lot of time verifying dimensions and then cut the aluminum extrusion to length, then cut all the opaque plastic panels.  Finally, I cut the two wider transparent panels so that I could build the side panels.  These seemed like an easy place to start.

I have the two side panels built.  These are one opaque and one transparent panel in a frame with a divider between them.  The rendering looks like this 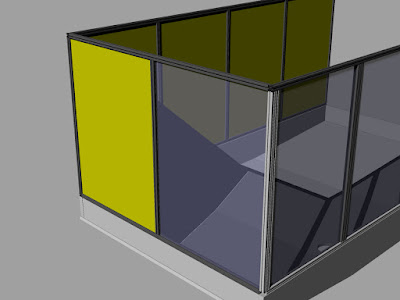 The way I tried to build these was to build the top and bottom rails first.  These are 35" pieces of the 15mm extrusion this is built from.  They get stamped steel L brackets which require four M3 5mm screws and M3 nuts, and I mounted the L brackets that go in the ends, tightening only the two screws that anchor the bracket to the top or bottom rails.  I left the bracket in the middle loose until I got the plastic panels in the right places.  I put a few (~2 to 4) extra nuts in each segment in case I want to add something at a later date.  The L brackets attach the three uprights to the top and bottom rails.  It might be better at this point to show you a finished panel so that maybe you can see these details. 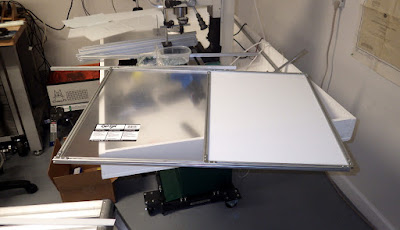 The main difficulty is that the white corrugated plastic (Coroplast) is 4mm thick nominal, while the groove in the extrusion is 3mm wide.  The "all you gotta do" answer is to slit the ends of the corrugations and the length of the sides, and then it slides together easily.  Not quite.  My idea was to slide the white plastic panel into the slot in the extrusion along the right vertical piece, into the groove in the bottom and then slide the middle upright onto the panel.  That was troublesome.  Because the plastic is being compressed into place, it works better if you slide the extrusion along the edge of the Coroplast, except that it gets a bit harder to slide it every inch as the friction increases.  Getting the entire edge in place at once turns out to be essentially impossible, but with patience, pressure, and small jeweler's screwdriver to help center the panel, it can be forced into the groove all the way around.  Once the white half was made, I slid the acrylic into the left side, and that was enormously easier.  It's 2mm thick in a 3mm slot.  Even with the corrugations slit to make the Coroplast more compressible, it's rough to get in the slot.

The second one took a bit less time, but was still rough to do.  I did most of it with the pieces lying horizontally on a convenient flat surface (our freezer) and alternated between that and standing it on edge on the floor.  Mrs. Graybeard was a great help and did  a lot of the fussy details of assembly.  In places where my height and strength advantage would help, I took over.

The back panel is going to be rough without building some sort of fixture to help assembly, or some other changes.  The most direct would be to widen that 3mm slot so that the 4mm plastic fits into it more easily.  I haven't worked out just how to do it on any machine, but I have a 3/16" end mill, which would make the slot 4.76 mm wide.  Widening the slot would make assembly much easier.