A Man With Two Watches Never Knows What Time It Is

That's one of my favorite modern proverbs, one with which almost everyone can identify - at least if you remember depending on a watch without instant access to "atomic time" through your cellphone connection  (most of the great, older proverbs come from the Bible's book of Proverbs).

That's prompted by something that happened today.  I was up an hour before sunrise to get a pork butt into the smoker.  No, it has nothing to do with the Super Bowl, it was just time to do some experiments with my smoking setup.  The smoker was preheated and the butt went into the smoker by 7:00 AM.  I put two temperature probes into it, the built in temperature probe and my new remote reading thermometer.   That's where the problem showed up. 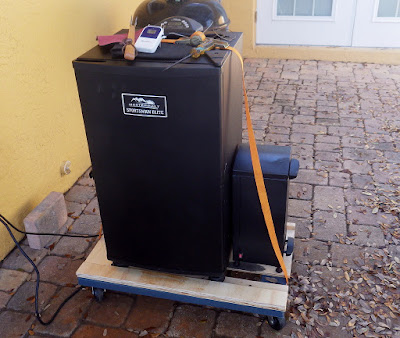 The pork butt was rubbed and left in the refrigerator overnight, as always, so it was cold.  The built in probe (on the left side of the meat) said 37, the remote probe (on the right) said 29.  That puzzled me.  It was out of the freezer long enough that we thought it was thawed before it got rubbed and put in the fridge.  I thought it might really just be a cold spot, so I'd keep an eye on it.  As the morning went by, the two thermometers diverged.  By 10:00 they were getting to be 70 degrees apart, almost 40 and 110, an enormous thermal gradient for probes a few inches apart.  What's going on here?  Is either one right?

Well, what would you do?  In this case, I have other ways of measuring the temperature as long as I don't leave them in the smoker (where the chamber temperature is about 240).  A quick check showed the "independent" thermometer pretty much agreed with the other two.  There really was that big a temperature gradient.  In the intervening hour and a half, the difference has gone down.  It's now 147 and 134.  I suspect that by the time we reach pulling temperature late in the day that difference between thermometers will go down to a couple of degrees.

Now the real purpose of this experiment was to investigate that little chamber on the right, an external smoke generator that I first talked about New Year's Eve.  As I said in that little piece, one of my main reasons for getting this was that they claim it can produce smoke for "up to 6 hours", which would make an overnight smoke for something like a big beef brisket much more bearable.  My experience on New Year's Eve was that it only ran for perhaps two hours, and I found that the wood chips would stick in the chute inside the smoke generator requiring a poke with a long screwdriver to get them to drop onto the heater.  So far, it seems to be doing the same thing.  I had to poke at the chips around 1-1/2 hours into the smoke, and I did it again at around 3. In retrospect, I should have let it sit longer to see if the smoking then stopped, or just became thinner.

And while I'm on the topic of that cold smoking attachment, we tried the cold smoked cheese on Friday as a "birthday treat".  That was just slightly over a month since we smoked, vacuum sealed, and put it in the refrigerator.  It was fantastic.  There's one block of cheddar we smoked and haven't opened.  Some of the guys on the forum I read say they won't touch it for a year.   I don't think I could make that.