Clues From Deep in the Earth Found in Ancient Pottery

In what appears to be a neat example of detective work, activity in the Earth's magnetic field has been measured with unprecedented accuracy in time, by measuring magnetic particles embedded in nearly 3000 year old pottery.  The paper appears in the Proceedings of the National Academy of Sciences, often known as PNAS, from a team of researchers the majority of whom are at Tel Aviv University in Israel.  A friend sent me this link from NPR, although the story has been picked up fairly widely.


About 3,000 years ago, a potter near Jerusalem made a big jar. It was meant to hold olive oil or wine or something else valuable enough to send to the king as a tax payment. The jar's handles were stamped with a royal seal, and the pot went into the kiln.

Over the next 600 years, despite wars destructive enough to raze cities, potters in the area kept making ceramic tax jars, each one stamped with whatever seal represented the ruler du jour.

So what do ceramic tax jars have to do with knowing the magnetic field?


All those years ago, as potters continued to throw clay, the molten iron that was rotating [in the core] deep below them tugged at tiny bits of magnetic minerals embedded in the potters' clay. As the jars were heated in the kiln and then subsequently cooled, those minerals swiveled and froze into place like tiny compasses, responding to the direction and strength of the Earth's magnetic field at that very moment.  [text added - SiG]
...
Political instability provided another handy recording, because the royal seals stamped onto the jars changed often enough to allow the researchers to narrow down the timing of those magnetic records to windows of about 30 years.

"Instability — or even better, wars and destruction — are the best for us," says Ben-Yosef. (Peaceful transitions are nearly impossible to spot in sedimentary layers, but something like a burned city makes a clearly visible dark line. And the Assyrians had a knack for destroying cities.)

Interesting results come from this research.  To begin with, it correlates with other measurements, since the invention of the magnetometer by the great Carl Friedrich Gauss in 1832, showing that the magnetic field is getting weaker.  The usual estimate is that the field is 10% weaker today than "normal", but this research shows that fluctuations over fairly short periods were seen 3000 years ago.


When Ben-Yosef and his colleagues studied 67 jar handles spanning from the late 8th century B.C. to the late 2nd century B.C., they found that the Earth's magnetic activity has been a lot choppier than people expected.

For example, the jars indicate that in the late 8th century B.C., the core went a little crazy. The intensity of the magnetic field spiked to about double what it is today.

"It was the strongest it's been, at least in the last 100,000 years, but maybe ever. We call this phenomenon the Iron Age spike," Ben-Yosef says.

Then, it weakened quickly after 732 B.C.E., losing about 30 percent of its intensity in just 30 years.

Importantly, the spike in magnetic activity has been verified elsewhere.  Geologist Steven Forman of Baylor University has also found evidence of a magnetic spike about 3,000 years ago, based on his study of Hall's Cave in Texas.  In Forman's work, though, there were no handy dates stamped on things, and his estimate of "3000 years ago" is less precise than the paper in PNAS.  They probably measure the same event, but without precise measurements in Texas, or some other scale, I don't know how they'd know.

As I wrote last August,


All of our lives, most of us have heard that the Earth is "due" for a North-South magnetic pole reversal with the experts saying the poles have flipped many times and it has been too long since the last flip.  The story I recall hearing was that it took a long time to happen; more like centuries than decades, and certainly outside typical lifespans.  Nowadays, there seems to be some belief that it could happen very quickly; on human timescales.

It's a bit of our gallows humor, but Mrs. Graybeard and I regularly joke that at our ages any membership could be a lifetime membership and any subscription could be a lifetime subscription, so when I see an article saying the poles could reverse "within our lifetimes", I'd like them to be a bit more precise.   Still, it could well be that the process has already started, and might even have been going on throughout our entire lifetimes.  Earth will probably go through a period of magnetic chaos before the poles reach their (more or less) permanent positions and that could well be within the life of people reading this blog.  It's possible there could be more than one of each pole for some time so that a compass would point to two different "norths", making navigation by compass impossible.  Birds and other critters that use magnetic particles in their bodies for navigation will have a hard time, and migratory patterns would be seriously disrupted.

For one view, I'll go back to the original article.


It's counterintuitive, but massive fluctuations like the Iron Age spike, Ben-Yosef says, indicate there's nothing to worry about when it comes to today's weakening magnetic fields. Fluctuation, he says, must be the norm for our planet's magnetic field, not a harbinger of apocalypse.

For counterpoint, I'll slightly modify what I wrote last August


No one alive has ever seen this happen, so everything they think they know comes from looking at old rocks and computer models.  None of these are verified by comparison to an actual, witnessed event.  Whether the TEOTWAKI situations that you'll read about would really happen or not is just as hard to say.  There don't appear to be mass extinctions associated with previous reversals, so it appears life muddled on through somehow.   A technological civilization might require more than just "muddling on somehow", though.

I'm hoping that with a weakened geomagnetic field, auroras may become visible farther south.  I seriously want to see auroras some day. 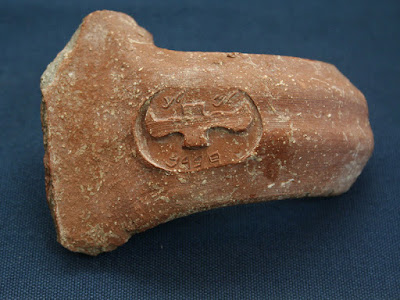 A jar handle bearing the tax stamp of one of the ancient kingdoms (photo from NPR - image courtesy of Oded Lipschits).