According to an American Action Forum report, the 8 years of the Obama administration issued regulations costing the US $890 Billion.  In terms of major regulations, Obama is in a class by himself.   President Obama will average at least 83 major rules annually, 18 percent more than President Clinton and 33 percent more than President Bush. The Obama Administration also set a single-year record for the number of major rules issued in 2010 (100) and then broke their own record in 2016 (with 104).

Of course, the problem here is that these regulations are abrasive in the metaphorical gears of the American economy's machine.  They slow down industries, reduce hiring, reduce employment, and reduce pay.  These cost burdens break down as:
The end result, though, is that somebody has to bear that $890 billion in costs, and that someone is the American people.

For perspective, during the last four years of the Bush Administration, it imposed more than $159 billion in burdens; President Obama and his regulators published more than that in 2016 alone, $164 billion, which is nothing compared to Obama's total of $218 billion in 2012!

Who are the big offenders?   I bet I don't have to tell you the most expensive regulations came from the EPA.  Breitbart summarized it as follows:


The Environmental Protection Agency (EPA) issued $344 billion worth of regulations during the Obama administration, and implemented the most expensive regulations out of all government agencies, according to the study.

The Department of Energy came in second, issuing $194 billion in regulations over the last eight years.

The Department of Health and Human Services (HHS) issued $104 billion in regulations as it worked to roll out Obamacare provisions. 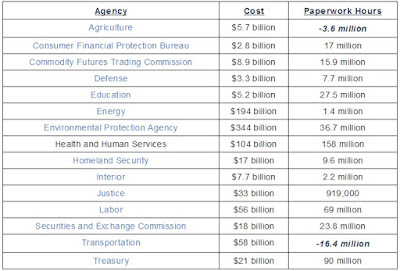 The AAF report slices and dices these numbers in all sorts of ways, for the truly interested.