A group of scientists at Harvard have claimed and offered evidence that they have produced metallic hydrogen.  The critics are skeptical.

Hydrogen, of course, is the lightest element and generally only observed as a gas.  It has been liquefied for use in rocket fuel, but that's a rare thing.  It boils out of the liquid state at 20.27 K or −423.18 °F.   While hydrogen is known as a low density gas and considered by most as a non-metal, it has the electron structure of the entire first column of the periodic table, 1 S orbital electron, which are all metals - the alkali metals.  As far back as high school chemistry, I was told that while no one had seen it in the metallic state, that under the proper conditions it should act like those alkali metals.

Solidifying metallic hydrogen has been attempted in the past, which is why the news is being regarded with healthy skepticism.  Theoreticians originally said it should turn metallic at pressures of 25 Gigapascals; instead, Harvard reports they needed to achieve 495 Gigapascals (4.89 Million atmospheres or 71.8 million PSI), almost 20 times more pressure.

How can anyone generate that kind of pressure?  The high pressure physics community has been using diamond anvil cells for a while now.  DACs put two single crystal diamonds in a holder and apply force to them.  The combination of the small size of the culet (bottom-most pointy part) of a faceted diamond (around 100 to 200 microns diameter) coupled with the almost incompressible hardness of diamonds, can achieve enormous pressures. Pressure is force divided by area, so tiny areas require less force than larger areas.

The researchers said that as the pressure was increasing, they were able to observe - and photograph - the changes in the hydrogen in the cell. Ars Technica has this summary:


After loading the sample and cranking up the pressure (literally—they turned a handcrank), they witnessed hydrogen's breakdown at high pressure, which converted it from a clear sample to a black substance, as had been described previously. But then, somewhere between 465 and 495 GigaPascals, the sample turned reflective, a key feature of metals. 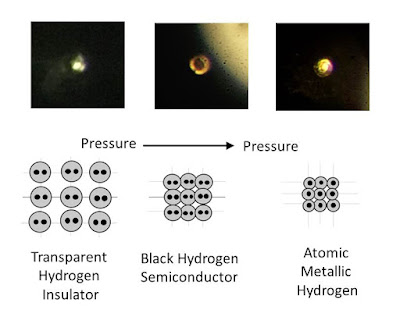 Starting as a transparent gas, the sample begins to darken at 2 gigapascals as it transitions into a semiconductor. At 495 gigapascals, it appears to become a light-reflective metal. (Courtesy of Physics.org) (Source of caption)

In a way, what comes next is the hardest part. Now that they've created metallic hydrogen, what do they do with it?  They left it in the pressure cell.  There are tests that they would love the answers to, such as whether or not it remains as an observable metal when the pressure is released.  If it does, there are theoretical reasons to think it will be a superconductor at room temperature.  That could be quite interesting.  Again, back to Ars Technica


The authors have no way of telling whether the metallic substance is a solid or liquid. They expect solid based on theoretical considerations, but all they know for sure is that it's 15 times denser than hydrogen chilled to 15K, which is what they put into the diamond anvil.

One result they do have is that there was no change in appearance even as they allowed the sample to warm up to 83K. That's intriguing, because some theoretical work has suggested that metallic hydrogen could be metastable, meaning it will remain metallic even as the pressure and temperature that forced it there is released. That will definitely be something worth checking into in more detail. Other calculations suggest it will be superconducting, but that hasn't been looked at yet at all.

The skeptics, rightly, say that they'd like to see more data and suggested what they want to see.  Entirely reasonable thing to do when many scientists have tread this path before and been wrong.