Ran across an interesting little piece on the user forums for Rhino3D, a link to a story in the American Chemical Society Journal Environmental Science & Technology which looked at emissions from desktop 3D printers.  The story on the Rhino forums was linked by Facto Design.


Anyone who uses a 3-D printer at work or home knows the tell-tale scent of the machine at work, a slightly burnt chemical odor that fades over time. If you're like me, you've long wondered whether you should worry about it. Now, a team of scientists from have published a study proving that yes—there are hazards in 3-D printing in enclosed spaces, especially with certain materials. But there are ways to mitigate it, so don't panic.

The author on this one is a bit over the top to me; I can't say that whenever I smell something like " a slightly burnt chemical odor" that I wonder if I should be worrying, but I know there are folks like that.

3D printing is a vast subject and even low cost, home-market printers print in a few different materials.  The article looks at a few of them.  Of most concern is whether the vapors emitted, the Volatile Organic Compounds (VOC), or the ultra-fine particles (UFP) they emit are potentially toxic or carcinogenic.  The most common material appears to be PLA, and it got the best results.


What they found was that the level of harmful particles and fumes depended mostly on the filament material, not the maker of the printer. For example, ABS emitted styrene, a type of chemical that's toxic and carcinogenic. Other materials based on nylon emitted caprolactam, a chemical linked to a laundry list of health problems. Meanwhile, the PLA filament emitted lactide, which is actually pretty benign. All told, the levels of ultrafine particles reached concentrations 10 times as high as a normal office or lab.

The test setup was simplicity itself.  The researchers put the printer in a sealed enclosure and vented it into a precision instrument for measuring such things.  Each of the five printers tested (FlashForge Creator, Dremel 3D Idea Builder, XYZprinting da Vinci 1.0, MakerBot Replicator 2X, and LulzBot Mini) spent between two and four hours printing out the same sample object. A particle counter tallied the number of ultrafine particles each test was spewing into the airtight room, while also sampling air quality for VOCs following the EPA's standards. They also tested more than a dozen materials, ranging from ABS and PLA to wood and clear polycarbonate.

The important question, of course is if this is a serious threat and printers like this are dangerous to be around.  It turns out that the answers aren't extremely clear, and it requires some careful reading.  Some materials are better than others.  Clearly, they're not extremely toxic - no one drops dead after sitting near a printer - but they aren't so benign that you should disregard them.  You can bet that NIOSH and some other agencies are either reading this or preparing to replicate the results and propose regulations.  The conclusion section of the original ES&T journal article is several paragraphs long and so too long to excerpt here, but let me grab a few points that seem relevant.


Measurements of UFP and individual VOC emission rates presented here have important implications for human exposure and health effects. For example, styrene, which is classified as a possible human carcinogen by the International Agency for Research on Cancer (IARC classification group 2B),(23) was emitted in large amounts by all ABS filaments and the one HIPS filament. Caprolactam was also emitted in large amounts by four of the filaments: nylon, PCTPE, laybrick, and laywood.  Although caprolactam is classified as probably not carcinogenic to humans,(24) the California Office of Environmental Health Hazard Assessment (OEHHA) maintains acute, 8-h, and chronic reference exposure levels (RELs) of only 50, 7, and 2.2 μg/m3, respectively.(25) We are not aware of any relevant information regarding the inhalation toxicity of lactide, the primary individual VOC emitted from PLA filaments.
...
The predicted styrene concentration in this configuration (150 μg/m3) would be approximately 20 times higher than the highest styrene concentration measured in commercial buildings in the U.S. EPA BASE study(31) and more than 20 times higher than the average concentration in U.S. residences.(32) There are also reports that suggest exposure to styrene at these concentrations could be problematic for human health.
...
Although we are not aware of any regulatory limits for indoor UFP concentrations, an increase in UFP concentrations to ∼58 000 cm–3 would be approximately 10 times higher than what we typically observe in indoor air in our office and laboratory environments and what has been reported as a typical 8-h average indoor concentration in schools.(35) However, it would only be moderately higher than typical time-averaged concentrations in homes(36) but lower than what is often observed in other microenvironments.(37)

The paper's conclusion ends with a recommendation for printer makers to develop safer printing fibers, at a time when the emphasis appears to be on developing more useful fibers, and it seems to me that the Iron Law of the Perversity of Inanimate Objects dictates that those will be opposites.  They also recommend that printer makers endeavor to make safer products, stating, "manufacturers should work to evaluate the effectiveness of sealed enclosures on both UFP and VOC emissions or to introduce combined gas and particle filtration systems".  Until now, printer makers have been driving to cut costs and have put out many open frame printers, which have the more immediate hazard of burning oneself on the table.   Putting printers in a sealed enclosure that filters the air it exhausts will put 3D printing into the realm of industrial machines that don't really belong in a house.  That's a whole 'nother level of big, difficult to make, and expensive.

Of course if you have a printer and are concerned about exposure, one obvious answer is to vent it to the outside.  Perhaps use the printer under a stove's exhaust hood, if it really exhausts to the outside.  If you have babies or young children, keep them out of a room where a printer is running ABS plastics, because styrene vapors in low concentrations have been associated with a higher risk of lung infections in infants.  The short version I see is to treat a 3D printer like spray painting.  A booth vented to the outside would be great to have.  It's not unreasonable to consider putting the printer outdoors, if conditions allow. 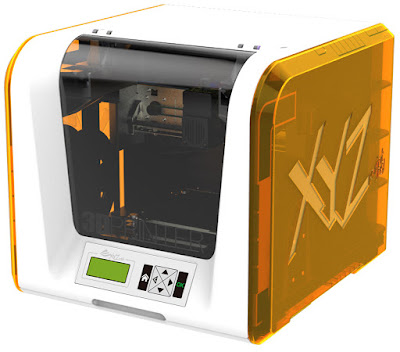 Studica's DaVinci jr. printer.  Being enclosed is a good start, but it's not going to be air tight and won't be filtering the air.