On Cellphones, Radios, Motors and Waterproofing

A few years ago, I posted a story about having one of those bad days that ends up costing a lot of money.   To shorten the story somewhat, while returning to dock, I got into one of those "America's stupidest home video" moments - feet on the deck while stretching out to reach for a piling - and fell out of the boat into the saltwater lagoon.  There's only one positive thing I can say: I didn't get hurt.  I can't say the same for the iPhone 4s in my pocket, which never worked again, and had to be replaced.

If you go out to buy a waterproof phone, radio, or any other item, you're going to run into two kinds of salesmen.  One will say, "sure it's waterproof".  The other will say something like "It's rated to IPX67", or "it can be submerged in a puddle or a few feet of water for half an hour".  Avoid the first salesman.

Industrially, people are very reluctant to say waterproof because they want a definition to test their products to.   For example, consider the term waterproof camera.  It means something different to someone going out on a boat and wants to make sure their phone's camera will work if it gets hit by water drops than it does to someone who wants to go SCUBA diving in 60 feet of water.

The manufacturing world has largely gone over to IP codes: the International Protection Marking, IEC standard 60529, sometimes interpreted as Ingress Protection Marking.  On a product, the codes are denoted by the letters IP and two digits.  The first denotes being sealed against solids or particles, and the second denotes being sealed against liquids.   The first digit can run from 0 to 6 and literally runs from entry of something larger than a hand down to dust particles:
The second digit can run from 0 to 9 with a special suffix:
As you can see it's rather specific in what it says the product is protected against, and there's an additional column that I omitted which talks about how these things are tested!

As I alluded to above, many VHF radios are rated to IP67, sometimes called IPX7.  There's no rating for dust because it's assumed that anything sealed against water is going to be sealed against dust and particles as well.  I've seen ads for smartphones that imply a certain level of waterproofness, the commercial showed them being washed in soap and water, but no IP ratings on them.

A practical application of this subject that's important to me right now is waterproof stepper motors.  Mine aren't.  In my last couple of years at work, I got involved with evaluation and testing of stepper motors (the radar antennas were moved by stepper motors) which were rated to be extremely resistant to water spray and corrosion.  For this to work, the motors had to designed to meet tough specifications from the start.  It wasn't possible to take a standard part and just dip it some sort of coating.  The motors were rated to MIL-STD-202G, a salt spray test with varying test times.  Their motors looked better at 10 days than the competition at 2 days and survived all of our tests without missing a step. 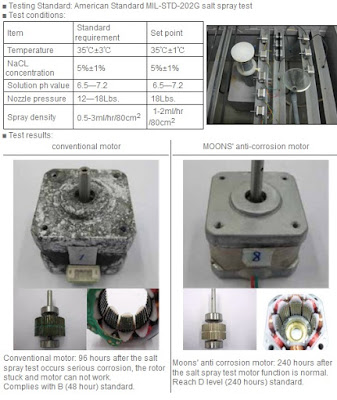 There are hobby-level motor suppliers who will apply some sort of brushed on or dipped coating over much of the motor for a fee.  They can't seal where the motor shaft comes out of  the body or it won't turn.  Based on how such coatings performed on our aviation radars, I'd say it's not worth bothering to get this.  Squirt some RTV around where the wires leave the body of the motor to seal it, and realize it's about as good as you're going to get.  The motors aren't intended to be submerged (IP67 or X7), but the experience of many people seems to indicate that they can handle some splashing.

To complicate things, there are other standards, like the older NEMA (National Electronics Manufacturing Association) ratings.  NEMA 6 looks like it would be a worthwhile level to try for, if a NEMA rating is all you have.