Tweaking And Verifying the Mill - Part 2

It has been an interesting few days of continuing to try to improve my G0704.  The biggest improvement is that I reduced the Y-axis backlash to .001", which is better by far than anything else I have.

In that process, I first put a handwheel on the Y-axis stepper motor, with the power off, of course, and found I could count the clicks of the stepper until motion started.  It started moving at six, which corresponds very closely to the .006" backlash I had.  (If my clicks are exactly 1/200 of revolution of the ballscrew, that's 5.91 thousandths).  I took apart the Y-axis drive chain and got into the familiar position of not being able to check the backlash because of the way the bearings work.  If I rotate the screw in one direction, I drive the table; if I unscrew it the other direction, the screw and all its bearings start coming out of the block they're sitting in.  I can push the parts back into place, but I need something like the motor mount to hold the bearings fixed in place.  So I made a tool. 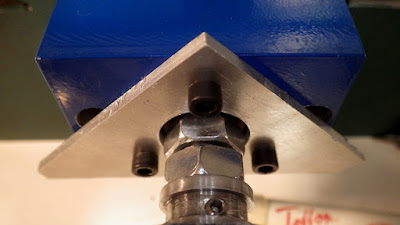 This is just a piece of 1/8" scrap aluminum I had lying around after making the fret rocker.  It resembles the actual piece that goes there, except for being 1/8 instead of 3/8" thick, and other than the hole pattern being random size and shape.  Of course, I only put the holes in it that were needed.  Once I did this, I couldn't feel any backlash at all with a handwheel on the Y ballscrew.  Once I rebuilt the drive parts, I could measure the backlash at .001".

Today, I tried to duplicate that fix on the X-axis but it flopped.  No improvement, so the backlash is still .006".  I need to think about this some more, and maybe try it again, but my gut feel is that it has to do with the order in which I did things on Y vs. the X, and pushing the ballscrew and bearings hard into their position and taking out all the slack there.  I might try that again.

The other issue I mentioned last week has also been resolved.  The issue was that I was getting 1/4 of the scale to movements I thought I should be getting.  One of the things that seemed to be coming from was the motor's microstep setting.  It can step in either 1/2 or 1/8 microsteps.  (Microstepping gives users the impression that they turn their 200 step motors into 400 or 1600 step motors.  It sort of does, but nobody guarantees the position accuracy of a microstepping controller.  It's done to smooth out the motion.)  There's a DIP switch along the top of the motor driver that allows setting some driver parameters, and the manual makes it seem like all we need to do is flip SW4 to change that from 1/2 to 1/8 and back.  Actually doing that made no difference. I have four motor drivers and not one of them changed when the switch was flipped.

In the end, I sent the vendor, Automation Technology, Inc., a support email.  It apparently got lost because I had to resend it after last night's posting. They actually answered me by 11PM Sunday night (!!) and after swapping a couple of emails, they told me the correct way to configure the motor.  The most important part: there's a switch (SW6) that must be changed that isn't mentioned in the data sheet at all.  My system is now stepping in 1/8 steps, 1600 steps per rotation of the ballscrew, or 8128 steps to the inch.  That number is tweaked a bit for each axis in the last digit until the command to go 1.000" truly goes 1.000".  It's affected by just how accurately the 5mm pitch of the ballscrew is made to 5mm.

Finally, I decided that my control box was just looking too darned plain, and needed something on the front panel.  By now, many if not most of you have seen my AR-15 from an 80% lower with the goofy cat on it; the goofy cat was chosen for a specific reason: the original version of this AR had mostly DPMS parts and it was sort of a nod to them.  DPMS has the fearsome looking panther as their logo, so I figured I'd use a goofy looking cat instead.  Between Mrs. Graybeard and I, the goofy cat has become somewhat of an emblem or logo.

Add a bit of techno-magic and you get this: 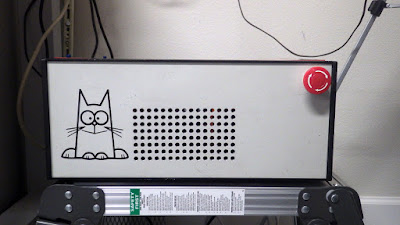 I'd like to claim it's my work, but in reality it was reader John who has become a friend.  The work was done on a vinyl cutter, and it's the kind of vinyl decal that can be bought in many places.