It has been interesting to watch the news unfolding today detailing what appears to be nothing short of a hit job, a political career assassination, against Lt. General Michael Flynn by members of the Deep State.

The story several people seem to be quoting is the Washington Free Beacon's Adam Credo's article, alleging that the classified information was leaked to the press by Obama appointees in the CIA determined to preserve the Iran nuclear giveaway program deal.


The abrupt resignation Monday evening of White House national security adviser Michael Flynn is the culmination of a secret, months-long campaign by former Obama administration confidantes to handicap President Donald Trump's national security apparatus and preserve the nuclear deal with Iran, according to multiple sources in and out of the White House who described to the Washington Free Beacon a behind-the-scenes effort by these officials to plant a series of damaging stories about Flynn in the national media.

The effort, said to include former Obama administration adviser Ben Rhodes—the architect of a separate White House effort to create what he described as a pro-Iran echo chamber—included a small task force of Obama loyalists who deluged media outlets with stories aimed at eroding Flynn's credibility, multiple sources revealed.

A "secret, months-long campaign" means these agencies have been plotting to take him down since well before the inauguration.  Gen. Flynn was known as a critic of the Iran deal, and of the CIA for so badly bungling the management of the Mideast in the wake of the wind down in Iraq.  The Blaze adds:


Flynn was one of the most vociferous critics of the Iran Deal and ridding him from Trump’s administration helps the cause to keep the agreement in place, despite repeated statements by Trump that he would dismantle what he called, “the worst deal ever negotiated.”

The whole thing seems to go back to secret aspects of the Iranian deal, and the Deep State's desire to keep them secret.  They were scared Flynn was going to somehow let those secrets out.


A third source who serves as a congressional adviser and was involved in the 2015 fight over the Iran deal told the Free Beacon that the Obama administration feared that Flynn would expose the secret agreements with Iran.

"The Obama administration knew that Flynn was going to release the secret documents around the Iran deal, which would blow up their myth that it was a good deal that rolled back Iran," the source said. "So in December the Obama NSC started going to work with their favorite reporters, selectively leaking damaging and incomplete information about Flynn."

The laughable New York Times, living up to my version of their motto; "all the news we feel fit to make up",  tried to imply that the leak of information was to let the media know that Trump was colluding with the Russians during the election (yawn) but even the intelligence report put down that lie. The Times left out this important sentence.


The officials interviewed in recent weeks said that, so far, they had seen no evidence of such cooperation.

The most in-depth coverage seems to be from Patrick Poole at PJ Media (whom I've already quoted), and specifically gets into the legalities of what these "intelligence community" people did.


House Intel Committee Chairman Devin Nunes is demanding to know why Flynn's conversations were being wiretapped. As one of the congressional "Big 8," if there were a covert program targeting Flynn, he would be one of the few to know:


“Any intelligence agency cannot listen to Americans’ phone calls,” Nunes told reporters Tuesday night. “If there’s inadvertent collection that you know is overseas there’s a whole process in place for that.”
...
“So in this case it would be General Flynn and then how did that happen. Then if they did that, then how does all that get out to the public which is another leak of classified information,” Nunes added. “I’m pretty sure the FBI didn’t have a warrant on Michael Flynn.” [bold in the original - SiG]

There is another component to this story as well -- as Trump himself just tweeted. It's very rare that reporters are ever told about government-monitored communications of U.S. citizens, let alone senior U.S. officials. The last story like this to hit Washington was in 2009 when Jeff Stein, then of CQ, reported on intercepted phone calls between a senior Aipac lobbyist and Jane Harman, who at the time was a Democratic member of Congress.

Normally intercepts of U.S. officials and citizens are some of the most tightly held government secrets. This is for good reason. Selectively disclosing details of private conversations monitored by the FBI or NSA gives the permanent state the power to destroy reputations from the cloak of anonymity. This is what police states do.

Trump famously said he intended to drain the swamp.  This swamp is filled with 12' long gators and they're fighting back.  The intelligence agencies and other political hacks are putting on a shameful display of insider politics at its worst.  While most commentators have talked about this for what it is, I heard Jason Buttrill on the Blaze, a former member of the intelligence community, talking like they just did the country a tremendous favor, but it sure doesn't sound that way to me.  It sounds like the intelligence community is trying to destroy the administration as John Robb talked about two months ago.  Apparently, it all centers on Obama appointees to the agencies trying to maintain what they view as their legacy.  Ben Rhodes, Deputy National Security Adviser for the Obama administration at the time, said that they viewed the Iran Deal as the Obamacare of his second term, meaning it was just as important to his presidential legacy. 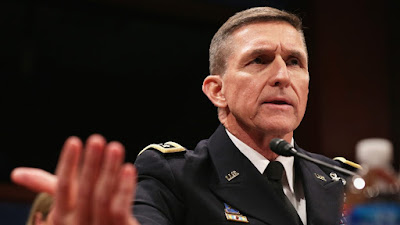