Item of the first:  the Florida Fish and Wildlife Conservation Commission (FWC) has ruined my joke.

Back in January, the FWC released information that they were hiring Irula snake hunters from India to help hunt down the Burmese pythons in the Everglades.

“Since the Irula have been so successful in their homeland at removing pythons, we are hoping they can teach Floridians some of these skills,” explained Kristen Sommers, leader of the FWC’s Wildlife Impact Management Section.


“The FWC has hired Irula python hunters from India to go out in the 'glades and hunt pythons."

“A spokespython today delivered the message, "The Indians were delicious. Please send more" ”

On a more serious note, the problem with Burmese pythons in the state is big and serious.  The state has had bounty hunts and other things to try to encourage eliminating the species, but the pythons seem entrenched and are even expanding their area.  In November, one was found more than a mile offshore in Miami's Biscayne Bay.  It looks like the pythons have won.  Another few non-winters like this one has been, and they'll probably be well-established up here in Central Florida.  They've already been verified north of here near Georgia's Okefenokee swamp.  Which has nothing to do with this story.

Item of the second:  Want to predict the odds on which of Trump's appointees the Democrats will fight the most?  John Lott of the Crime Prevention Research Center says his research shows it will be the ones who are most persuasive and might corrupt the liberals around them.


Tracking federal judge appointments over the past four decades, I have found that confirmations took much longer for graduates of top-10 law schools who served on their school’s law reviews. In fact, it took 65 percent longer compared with graduates who neither went to top law schools nor did particularly well there. Among nominations from the Carter through the George W. Bush administrations, confirmations took about 160 percent longer for the top students at top law schools who further distinguished themselves with clerkships on the Supreme Court.

We find the same phenomenon in jury selection, where lawyers often disfavor intelligent candidates or ones who make a living by persuading others. The concern is that these people will have a strong influence on their fellow jurors.
...
Likewise, Democratic senators don’t want a conservative Supreme Court Justice, even one who is somewhat closer to their views, who will be effective at persuading his colleagues.

Justices or lower-court federal judges can also exert influence by writing powerfully-worded decisions that are more likely to be cited in future rulings. Here, the evidence of “dumbing down” is striking. According to my analysis, federal judges faced 60 percent longer confirmation processes if their opinions once they are confirmed were cited 20 percent more often than those of their peers. Senators turn out to be very good at predicting how influential judges will be, and looking directly at citations is an even better measure of influence than where someone went to law school. . . .

So the fight over Gorsuch isn't that they don't like him and it isn't that he's going to change the court - the seat was held by Antonin Scalia.  The fight is that they think he might be effective in balancing the court toward his originalist views.

Item of the third:  credit where credit is might be due.

I've groused here about the Taurus Millennium recall a few times, most recently in December, and how I've been without my PT145 since August of '15.   This may be premature congratulations, but last Wednesday as I was having a lunchtime cup of tea, the phone rang and Caller ID said Taurus International.  The nice young lady verified who I was and informed me a new replacement for my pistol is in the works, and I should have it "in 2-3 weeks".  I was given a choice of a few models, and settled for a PT111.  She said they did not have a .45 pistol to offer, and my choice was essentially this one in 9mm or a PT140 in 40S&W.  While I have both calibers, I've been listening to Michael Bane long enough to hear him say .40S&W is in decline as a caliber and likely to become a niche round.

While it ain't over until till I have metal in my hands, for the first time since around the end of 2015, I'm thinking I might get something back for the gun I sent to Taurus.  I'll let you know. 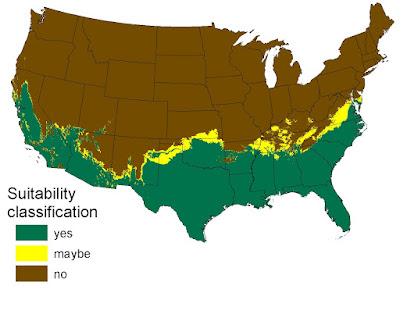 A map of areas in the US with climate similar enough the Burmese Python's native range to allow the species to get established.  I was rather surprised at how far north it goes on both coasts.  Apparently tracks back to a San Francisco Chronicle article, but I found it here.