Today, Townhall ran the headline story that not only did the Dakota Access Pipeline protestors leave an amazing amount of waste behind, they abandoned dogs.

There's a special place in Hell for people who abuse animals - and it's often the first sign of someone who will transition to abusing humans.


The environmentalists came to North Dakota to protest the construction of the Dakota Access Pipeline and lost. Now, as the cleanup of their protest camp begins, authorities have found it to be a disaster zone. There’s enough garbage and human waste to fill 2,500 pickup trucks. With the ending of the winter months approaching, they fear the spring flooding could wash this waste into the Missouri River, polluting it and other waterways. Yet, efforts to prevent an environmental disaster before the spring have hit another obstacle. Besides leaving heaps of garbage, protesters have left their pets.

After they found the first few dogs, cleanup efforts were halted and a rescue organization came in to search for more abandoned pets.

The rescue has been working hard to catch ALL the animals that were left behind at the camp, but Furry Friends Rockin Rescue isn't giving up on these abandoned pets.

Furry Friends reports that the sound of the heavy construction equipment being used to clean up after the protesters is scaring the dogs and they're hard to find.   There are still protesters in the camp, all subject to arrest, but the majority have left.  The state of North Dakota offered protesters a sweetheart deal including health checkups, hygiene kits, meals, and bus tickets out of state.  One report I heard last week said protesters were being offered a ceremonial arrest if they wanted a picture to post to Facebook or other ego booster.  In my mind, the state bent over backwards to be kinder to the protesters than they deserve. It's only encouraging the bad behavior.

The transportation assistance center will offer personal kits, water and snacks, health/wellness assessments, bus fare for a return trip home, a food voucher, hotel lodging for one night, and a taxi voucher to the bus terminal.

Transportation will be provided from the protest camp to the assistance center.

All camp residents are encouraged to take advantage of these amenities.

If you don’t have means to return home, you can receive a ride to the Travel Assistance Center in Bismarck, where you will receive:
· Free health and wellness check-up
· Personal hygiene kit
· Voucher for a one-night stay at a designated hotel in Bismarck
· One $15 meal voucher for Kroll’s Diner in north Bismarck
· Ride voucher from the hotel to the Bismarck Bus Depot the next morning.
· Jefferson Lines bus ticket (Good for non-local destination. Must be in the lower 48 states.)
After you receive your supplies, you will be given a ride from the Travel Assistance Center to the designated hotel.

NOTE: No pets will be allowed.

I don't think that's why those dogs were abandoned. 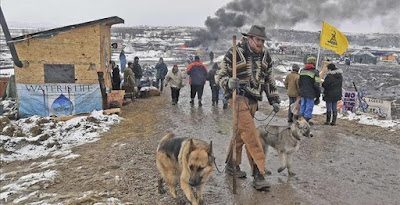 Labels: bags-o'-scum, commies and other idiots, enviro-nuts and flakes