It's All Closing In

The enclosure that is.  And speaking of closure, when I last mentioned the difficulties I was having, there was some room for closure on how I accomplished things.  It was mostly done by widening the slots in the extrusion rails with what I call a "circus trick" cut.  This may be strictly my term, I haven't heard other engineers use it, but it's a term I use for something that works once or twice under more careful conditions than usual, but isn't something you'd like to do every day.  The 64" rails were done this way.  And, by the way, the occasional cut on something too big to fit on your mill is absolutely part of any machinist's bag of tricks.

First, looking right and down the rail, you can see that it actually went under the chuck on my big lathe. 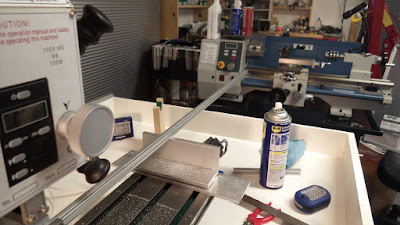 Looking the other way, you can see that the cutting was done with the rail in my mill vise.  This is the second cut in the series of four required on the 64" rails. 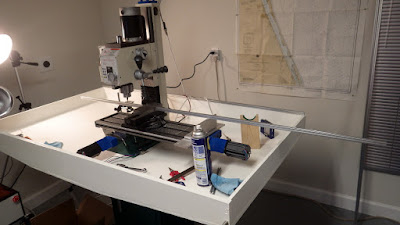 The rail is 64" long and I was only able to cut about 16-1/2" at a time.  I would set the mill table to -8.5 inches, toward the left end of the table's range, and then cut to +8 or +8-1/2 inches.  I have a "feeds and speeds" calculator for my phone, and it recommended a feed rate of 12.8 inches/minute.  (Since it was actually a very gentle cut, I was taking just tiny chips off of about .045" on either side of the slot, I later sped that up.)  I'd cut the 16", retract the head out of the slot and run the table to the left limit again, then slide the rail down until the spot where I had stopped cutting was just about at the cutter and repeat.  Think of that as doing a carriage return and line feed, like the old typewriters, except with a CNC mill.

I didn't think to do a video while I was cutting the long rails, and it would have been a few minutes long, but here's a video of me cutting a short rail.  These are the vertical rails in the enclosure, and they're all 23-5/8" long.  Some of the rails had two slots cut on opposite sides of the rail, while others only had one slot widened.  In this case it was the mill set to -6", cut to +6", then flip the rail end for end, do the CR LF, and cut it the second time.

The long rails could only get three cuts before I ran out of room on the left side of the mill and had to do the manual CR LF and swap that rail end for end.

I built the back wall of the enclosure today, and even though it has four panels instead of two (like the sides I did), it took less time than one of the side panels.  Some of that is undoubtedly better methods, but some of it is the widened slot, too.

Now that I have three walls out of four, it will be a big improvement once I get it assembled.  I spent several hours today more accurately modeling the front of the enclosure, which is all clear plastic and has folding doors that close to keep splatter out of the shop, and open for access.  I also spent time watching the videos on Hoss' channel to make sure I understood things.  I found a mistake I had made and spent some time cleaning up after that.