The RINO this year is the President Pro Tempore of the Senate, Anitere Flores of Miami.  Miguel at Gun Free Zone has been doing the yeoman's work of reporting on this with important pieces starting yesterday, March 9th, when the story broke.  Miquel's first report summarizes as follows:


Flores, a key vote on the Judiciary Committee, vowed she wouldn’t support Steube’s 10 other bills, which means they would have virtually no chance of making it onto the Senate floor.

Flores is one of five Republicans and four Democrats on the committee, so if she votes against bills and all Democrats vote in lockstep, Steube’s gun bills would be sent to their graves early.

Senator Greg Steube, who is referred to here, is a genuine advocate for Florida's law-abiding gun owners, and had originally (January) proposed a single large bill that embodied campus carry, open carry, carry in the "non-sterile" parts of airports (such as where the Ft. Lauderdale airport attack took place), courthouse accommodations, and more.  He broke it into 10 smaller bills after concerns that one portion might block all the others.

Marion Hammer, the NRA-ILA representative in Tallahassee and former NRA President responded to questions this way:


"I cannot tell you why Sen. Flores suddenly turned on law-abiding gun owners because I do not know.  (Until yesterday she had a 100% rating with NRA and USF)

I cannot tell you if Sen. Flores was acting on her own behalf or on behalf of the Senate President or Senate Leadership because I do not know.

I cannot tell you whether or not she has the power to kill all pro-gun bills and not allow the Senate to vote on them because I do not know.  But -- as the old saying goes -- "it ain't over 'till it's over,"  and this is only Day 2 of the 2017 Legislative session.

And finally, am I giving up for this session? ABSOLUTELY NOT.  I represent law-abiding gun owners statewide and they depend on me to fight for them and I will."


It's being widely reported that Ms. Flores effectively turned her back on her supporters and said she wouldn’t support any of Senator Steube’s 10 gun proposals.  Whether this is simply being a turncoat or if it's the result of bribery or other corruption, readers can't say but it's a betrayal of her supporters and all of Florida's law-abiding gun owners.  In spite of her anti-gun vote promise, in recently (post-Pulse club shooting) writing pro-2nd amendment letters to Marion Hammer, Ms. Flores clearly and plainly said she was on the side of legal gun owners.  In reversing direction she has betrayed not just all of her supporters, but has cast a pall over every Republican elected official in the state. 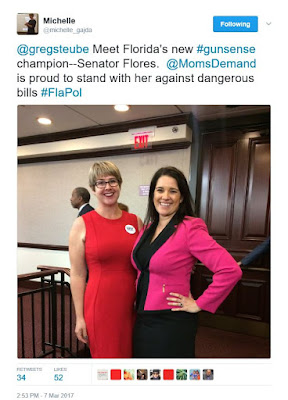 Miguel proposes a simple approach: reset every senator's NRA grade to zero.   We no longer grade on PR statements or returned questionnaires: we grade on results.  Pass laws restoring our rights, you get good grades.  Block them, you get left at zero.  Unfortunately, I don't think that's right either.  To Michelle Gajda and her fellow travelers, a zero from the NRA is a good grade and I don't want to give her a good grade.  Likewise, Senator Steube really is a better advocate and friend than Flores, so if we go by the idea that nobody gets above zero if the laws aren't passed, he ends up rated the same as she does.  She's the roadblock and needs to be seen as the roadblock.  I don't think there is a fix for someone flipping like this, until the primaries, by which time we're fighting a rear-guard action to try and get rid of them to keep them from doing more damage.  Again - just like last year.