The work on my CNC mill enclosure is idling a few days because of finding I was missing a couple of screws.  These aren't called out on the DVD I bought; the entire enclosure project isn't on the DVD.  There has been some discussion on the CNCZone forum about it, where I got most of the hardware list, and a handful of videos on YouTube.  While watching a couple of those videos for the third or fourth time, I noticed a couple of screws I had missed.  After spending half an hour at Lowe's looking for #6 pan head wood screws, I didn't think I'd find M3 x0.5 screws in the oddball length I need, so it was off to Bolt Depot where I got everything I thought I could possibly need, and some spares.  Like most of my Bolt Depot orders, the hardware I ordered was about half the price of shipping: $2.24 for the hardware and $4.95 for the shipping.   The hardware should be here tomorrow.

It's also idling because while cutting the clear acrylic for the front doors, I broke two pieces.  It's a comedy of errors thing.  Such comedies aren't usually funny for a while when they happen to you.

On the positive side, the other three panels are all up and the basic enclosure is built. 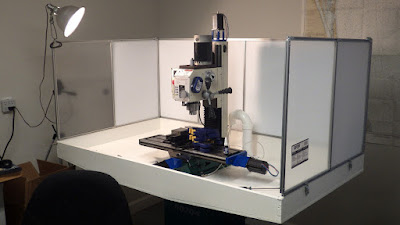 The structure uses latches to hold the sides to the back, one is visible at the top of the right corner, and also uses latches to hold the sides to the chip tray.  The picture below is a detail zoom of the right side top and bottom latches, along with another L bracket with two screws in it which attaches the side to the back.  To take this apart, I remove one screw from that L bracket and one from a matching bracket on the left side, then pop latches open.

If you look behind the mill, you'll see a PVC pipe sticking up with two 90 degree elbows on it.  Those feed the wires from outside the enclosure up into the chip tray and the tube is sealed to keep coolant from getting out of the tray.

Once this is done, the rest of the "To Do" list becomes smaller projects.  In no particular order:
It's usable for projects now, maybe like this one...  Those upgrades are primarily to increase friendliness and usability.