John Richardson over at No Lawyers - Only Guns and Money has a video from the confirmation hearings for Judge Gorsuch.  You can watch either the 5 minute version or a 2 hour 40 minute version.  I watched the short one.

The video is of Babs Feinstein* questioning Judge Gorsuch and trying to get him to commit that he'd overrule Heller and declare AR-15s as being illegal.  Gorsuch is no fool and is not going to be cornered by someone of her dubious intellectual abilities. 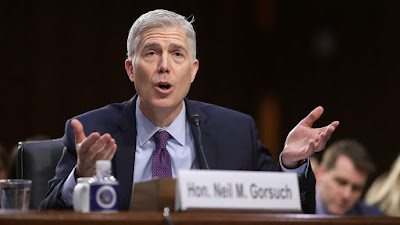 Does he answer properly?  I would say he does say the right things but he doesn't fill me with warm fuzzy feelings that he's really filling Scalia's chair properly.  He does say Heller is the law of the land, and that it gives certain tests that he's to apply.  He doesn't address anything about those tests.  He doesn't address how he might interpret those going forward, which, I suppose, is the game all supreme court nominees go through.

Justice Scalia said that the 2nd Amendment is certainly subject to regulation.  One thing I recall him saying was that right to bear arms for an individual implies that there is no right to weapons that an individual can't carry.  Examples of what might be forbidden could include crew served guns, a cannon, or perhaps anything larger than a BAR or M2 (and that's my interpretation, not what Justice Scalia said).  You certainly wouldn't have the right to have an Abrams tank, and by extension, I would think you wouldn't have the right to an M2 mounted in a pickup truck.

I'd like to see some indications gun rights are going to expand and not be reduced.  I'm one of those self-identifying fools who signed that White House petition to repeal the NFA of 1934.  I'd like to see that, the GCA of 1968, and to be honest pretty much all of it, thrown onto the junk pile of history.  I see no clues that Neil Gorsuch is such a guy.  Maybe that's the way they want it to be.

* to those who think "Babs" is too disrespectful, I'd say I'm trying to be respectful.  Ordinarily, I would call her "Back seat Barbie".

Edit 03/22 @0800 EDT: Judging by the first couple of comments, I suffered from my usual unclear writing.  My point is that while Justice Scalia was the high water mark of recent Supreme Court justices, he was not a perfect supporter of the second amendment and left a lot to be desired.  I was hoping that Neil Gorsuch would be better but I don't see any signs of that.   [SiG]