Saturday, I was able to get the oiling system for the CNC mill running despite the battery issues I talked about Thursday.  It didn't go as easily as expected.  I found a wall wart from an old Sound Blaster speaker system that was marked 12V at 4.2A.  Since the highest current I measured was 3.5-ish, I said, "hot diggity - I'm there".  Not quite.  The pump ran for a solid 4 or 5 minutes with oil never seen moving in the tubes.  Since the 35AH battery wasn't ready, it was on the CBA for the second discharge test, the only thing I had was my Gooloo jump starter.  The reason I picked this jump starter is that it has a 12V 10A output, enough to run my SHTF ham HF radio for hours.  That output ran the pump, so it's obvious that the basic system is OK, but the pump really sucks some serious current while it gets going and the current I read on the HF ammeter is a gross underestimate.

I have a spare PC ATX supply, as commenter matism suggested, and I pressed that into service.  Its 13 Amps is enough current, so it works to get the oil delivered from a dry start in about 4 minutes.  I need to build a case, to keep the power supply dry and add a few niceties like an on/off switch, but it will get the job done.  I don't plan to run the oil under the CNC control; just punch the switch every now and then.

The 35 AH battery recovered nicely after a couple of cycles.  The first time, I tried to discharge it at C/10 rate (3.5 A) and it failed quickly.  The output was erratic on the CBA.  I lowered the discharge rate to 1.75 (half that or C/20) and ran the battery down to about 30% discharged, then recharged it on my new "good" charger.  The second time, it discharged at the C/10 rate and looked completely normal.  I discharged it to about one third remaining and recharged it.

The biggest improvement is that the enclosure now closes thanks to some cheap magnets from eBay - 73 cents each including shipping.  I found a piece of half inch angle aluminum I salvaged out of something years ago, drilled some holes for mounting hardware and everything went together. 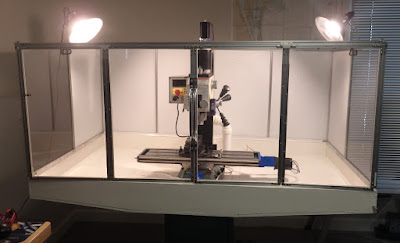 Closeup of one of the magnets and holders (the extra hole, upper right, is original - just happened to be there but was too high to be usable). 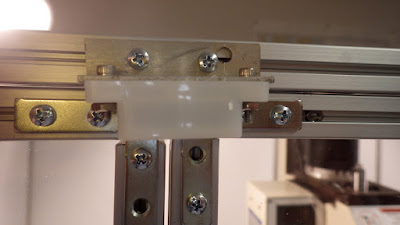 The drawback to these is that they will stop the doors from opening as far as I might need.  I find if I loosen the screws just a tiny bit, they'll stay attached to the extrusion but slide out of place if I want them to.  Perhaps I might improve that a bit with a bit of design and machining.

I'm working on the coolant system design now, and the option is either flood cooling with a couple of gallons of coolant and a sump pump, or something like the Fog Buster system.  Fog Busters are like mist cooling in that they spray a relatively tiny amount of cooling fluid, but in larger droplets than a mist.  I've read guys saying they have no drain and storage bucket under their mill at all with a mist cooler.  One user I read sprays a tiny amount of kerosene to cool aluminum.  I suppose that's not that different than using WD-40.  The professionals all seem to be using flood cooling, I'm just a bit concerned that this enclosure isn't an aquarium, and I need to do some testing before I'd feel comfortable spraying water around in there.

Basically, though, it's a fully ready CNC system.  Which means I've been pondering what I might build for my first project on it.  Does this look familiar to you? 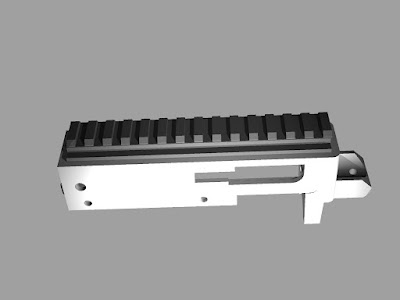 I understand it's hard to visualize from one view, but it's supposed to be a 10/22 receiver with an integrated picatinny rail.  I know there are products like this out there, but what's the fun in that?