A Bit of Fun This Afternoon

The first part wasn't fully expected, but we were hoping.  The Air Force Thunderbirds came into town today for a show this weekend and we were treated to them practicing their show around 5PM.  Castle Graybeard is a few miles from the airport, so we got to see a lot of the show, but not as well as someone at the airport would, of course.  Over the 30-something years we've lived in this house we've enjoyed being in the pattern for a lot of neat things to see in the sky, from the now-annual air show to seeing the space shuttle on the back of its 747 flying back to the KSC from a west coast landing. 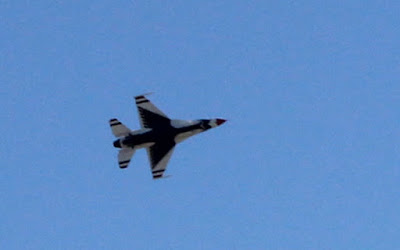 I didn't take this today; it was another time they were in town (the file is dated October 2014).  I hope to get more shots this weekend, or during tomorrow's practice, assuming there will be one.

The thing we get to see that most people don't is anything launched from Cape Canaveral or the Kennedy Space Center.  Tonight we got to see a truly historic launch: SpaceX launched a mission to place the SES-10 communications satellite into orbit; a European-built satellite intended to provide TV, internet and other services to customers in Latin America.  Satellite launches are pretty mundane these days, but what makes this one historic was being the first re-use of a previously recovered booster.  Plus, they stuck the landing on their drone barge, "Of Course I Still Love You", raising the possibility that this vehicle can be used again (the only views of this were online).  To add a touch more history to the flight, it launched from pad 39A, originally constructed for the Apollo program and the pad from which Apollo 11, and most of the Apollo missions, went to the moon.  After that, it launched most of the Space Shuttle missions.  In 2014, SpaceX signed a 20-year lease to use the pad. 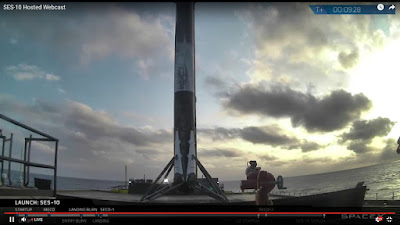 Video here.  This booster was first launched in April of '16, so almost a year ago, on a supply mission to the ISS.  I've found nothing saying they plan to reuse this one, but I'm sure they're going to study the heck out of it.  SpaceX has now successfully landed Falcon 9 first stages nine different times: six have landed on drone ships, and three have taken place back on land at Cape Canaveral.