The PURE study is the Prospective Urban and Rural Epidemiology study, chaired by co-investigators Drs. Salim Yusuf and Koon Teo of McMaster University in Hamilton, Ontario, Canada.  PURE is the largest global study looking at environmental, societal and biological influences on obesity and chronic health conditions such as heart disease, diabetes and cancer.  The PURE Study consists of over 150,000 participants from 17 countries of low, middle and high income.

A side track around here is that a dear friend of ours has been in and out of hospitals most of the last month.  He had been having some shortness of breath, and some swelling in his legs, so went to see his primary care doctor.  The PCP did an EKG, took one look and told him to get to the ER.  To keep this short, over the course of the next three weeks he was in and out of two hospitals, home and back to an ER a few times, eventually getting a pacemaker and oxygen at home.  He has been home for about a week, now and we went by today, finding him looking much better than earlier in the week.  There are many more doctor visits and tests in the near future.

His discharging physician (not his regular doctor) told him to eat a heart healthy, low sodium diet.  Right away, most of you have a picture in your mind of what that is.  I invite you to watch this video of Dr. Salim Yusuf describing their results.  Yes, it's a 22 minute video.  It's important to underline that Dr. Yusuf is about as mainstream as it gets.  He's the president of the World Heart Federation and the Department Chair in Cardiovascular Disease at McMaster University Medical School.  This is not "quack alert" time.

Note that the ideal sodium consumption for minimization of cardiac events was in the range of 3-5 grams of salt/day.  3 grams is approximately twice the MDR of salt and twice what my friend's discharging physician recommended for salt consumption.  Sodium was especially interesting because for some people there was a "check mark" shaped curve of cardiovascular disease (CVD) vs sodium intake; that is, when the sodium intake got too low or too high, CVD went up.

Now - some important stuff.  Studies like the PURE and virtually everything you get on the evening news are observational studies, and I maintain my belief that when most of those stories break, like last week's buzz story about gluten, they're not worth much attention.  Observational studies are essentially not able to distinguish cause and effect, but are useful for determining what needs to be studied in randomized, controlled studies.  There's somewhat of an exception to this, the Bradford Hill criteria, which basically say that if the effect is "ginormous" like it was with smoking (smokers got lung cancer something like 15 times more frequently than non-smokers), and if there's a plausible mechanism, and if a few other criteria are met, then you can attribute causality.  On the other hand, lack of correlation in an observational study can prove lack of causality.  If something causes another they have to be correlated, but being correlated itself doesn't prove anything.  (Easy example: there's a 100% correlation between people that breathed and people that died so that dying and breathing are correlated, but breathing doesn't cause dying).

The conclusions through the 9th year of the PURE study are shown below: 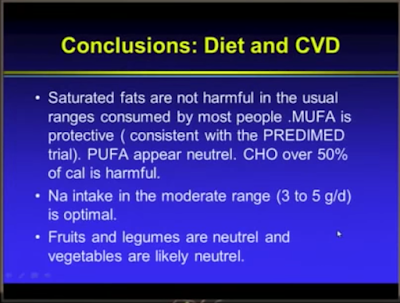 Key:
Not clear from the conclusion chart is that there was some evidence that saturated fat is protective; certainly not harmful.  There is no evidence that drinking 1% or 2% milk instead of full fat milk is protective; in fact, dairy fats appear protective.  All of which shows, according to this study, that a bacon cheeseburger - without the bun - might be the best food you can eat.  Do you like a salad with that?  Dr. Yusuf says "you have to eat something - if you like vegetables, eat vegetables".  So go have some bacon!