I told the story of waiting on a backorder with Midway until it expired, and then another 10 months.  The day I wrote that piece, I ordered one of those buckets for $100.  In a way, I'm really happy to see the $80 advertised prices again.  It seems to mean .22 is still sliding down, even if it's in fits and starts.

I'm routinely seeing 9mm in the $10/box range, .223 at 30cents/round - including shipping- and everything seems plentiful.  Before Christmas, I got some Federal Eagle 45 for about $12/box, after a mail in rebate.  I know it's rough on the manufacturers, but Life is Good for ammo buying.

One of the pieces of scuttlebutt I heard was on Michael Bane's podcast when he quoted a gun store owner as saying, "if I gave away an AR-15 with every concealed carry gun I sold, I might be able to reduce my inventory enough".   The daily gunwinner.com newsletter has had fully built ARs for $399 - I assume shipping, FFL and all those other fees still apply, but "starting at $399" is pretty good place to start from. 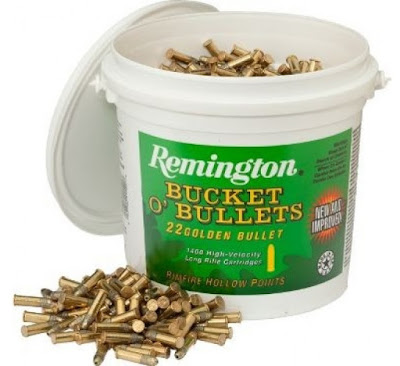 While I'm on the topic of happy gun news, remember this?


I've groused here about the Taurus Millennium recall a few times, most recently in December, and how I've been without my PT145 since August of '15.   This may be premature congratulations, but last Wednesday as I was having a lunchtime cup of tea, the phone rang and Caller ID said Taurus International.  The nice young lady verified who I was and informed me a new replacement for my pistol is in the works, and I should have it "in 2-3 weeks".  I was given a choice of a few models, and settled for a PT111.  She said they did not have a .45 pistol to offer, and my choice was essentially this one in 9mm or a PT140 in 40S&W.

Today at about 5:30, my FFL called and said they had a gun for me.  The situation was all news to them, but it appears tomorrow I'll go up to the Friendly Family Licensee and see what we can work out.  I don't feel much need for another 9mm handgun, but maybe we work something out.  I was telling a friend just last night that if they had made it in under 2 weeks, I'd give them extra "grace and class" points.  If they had taken 3 weeks, then, well, no extra points for them.  Now that we're at twice the estimated time, I'm back to the "never another Taurus" camp.  FWIW, the day they told me that was February 1, so it's 4 weeks.