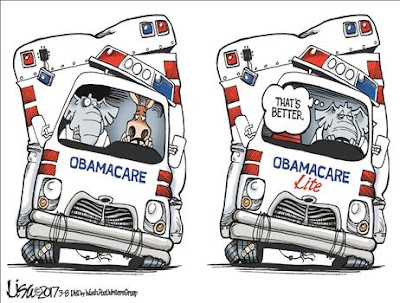 Like I said a couple of weeks ago (about "repeal and replace"):


Why should we want to replace it?  Why wouldn't we just want to burn it to the ground and do everything we can to create a free market in medical care?   From what I can see, the problem with healthcare is over regulation and a thoroughly broken market because of it.  This brokenness has been building for over a hundred years.  Naturally, anything that took a hundred years to break is going to be hard to unscrew.

While I know the president is going through his campaign promises and ticking them off his "to do" list, Rand Paul is among the most reasonable voices in this whole mess.  Rand says repeal it now because everyone is in agreement on that part, then work on a possible replacement.   According to The Hill, Paul introduced a repeal bill on Thursday:


By introducing the new bill, Paul hopes to repeal the ACA without immediately rushing to replace it. He argued in a written statement that Republicans are much more united on repeal, saying:


“The Republican Party is unified on Obamacare repeal. We can honor our promise right away by passing the same language we acted on in the last Congress."

Paul continued by pointing out that they could replace it later on, saying, “we can have a separate vote on replacement legislation that will deliver lower costs, better care, and greater access to the American people.”

John Hawkins at Townhall.com has a good summary:


Although Barack Obama, Hillary Clinton and the rest of the Democratic Party are guilty of a multitude of sins against America, the worst one was Obamacare. The bill was never popular. In fact, it was so hated that it catapulted Scott Brown into Ted Kennedy’s seat in Massachusetts for a term. The bill was an albatross around the party’s neck and the results were devastating.

Why was Obamacare so costly to the Democrats? Because the bill wasn’t bipartisan. Because they sold it with lies. Because it was never popular to begin with. But most of all, they created a system that had a small number of winners and a large number of losers.

So popular, it drove the people in Massachusetts to give a seat that has been under Democratic control since the last ice age to a marginally competent rookie like Scott Brown. It has literally made the Democrats a marginal party.  All they can do is work at screwing up things.

Look, I'm sure there's a subset of the population for whom Obamacare works.  Someone with an expensive existing condition, or was otherwise so broke and got such good subsidies that they got a winning hand would certainly be happy with it.  As many people have pointed out (including me); getting insurance for a condition you already have isn't the typical risk mitigation role of insurance, it's redistribution of the premiums.  On the other hand, most people were not in that small group and saw their deductibles and premium costs skyrocket.  Retirees are forced to pay for insurance for maternity care they'll never use; non-drinkers are forced to pay for alcoholism treatment insurance, and more.  They completely destroyed what little resemblance health care had to a market-driven system.

Why should we want a replacement anything at all like Obamacare?  It was designed from the start as socialist income redistribution.  I could do (and have done) days worth of columns on this.  For example, way back in the first year of this blog, 2010, I wrote a piece on Donald Berwick, who had been given a recess appointment to be the Medicare/Medicaid czar in the early days of Obamacare.


Dr. Berwick is now in charge of a program with obligations of 95 trillion dollars (debt clock) - far, far higher than the GDP of every nation in the world.  As far as I can tell, he has zero experience with finances.

Dr. Berwick was not only an unabashed fan of "death panels", but of socialist redistribution of wealth.


"Any healthcare funding plan that is just, equitable, civilized and humane must, must redistribute wealth from the richer among us to the poorer and the less fortunate. Excellent healthcare is by definition redistributional," said Berwick. ...  Is health insurance redistribution?  I voluntarily pay into a system that will pay benefits to any member based on the money it collects from the members of the plan.  I fail to see that being socialist.  So if insurance isn't "just, equitable, civilized, and humane" what exactly is he advocating?  Taxing you to pay for other people.  Government, as Washington said, is force.  Try not paying your taxes, and if you're not a member of the administration (e.g., Timothy Geithner), how much do you want to bet that you eventually don't get a gun pointed at you?  No, this is not humane, it is theft.

One of the architects of the law was Rahm Emmanuel's brother Ezekiel, who argued we should all die at 75 for a handful of egotistical reasons.  Another was Democratic street thug organizer and scumbag Robert Creamer, who came up with many concepts for Obamacare while in Federal Prison in the mid '00s.

It is such a fetid cesspool of legislation it should be torn up from the ground up.  There's no reason to want anything like it at all.