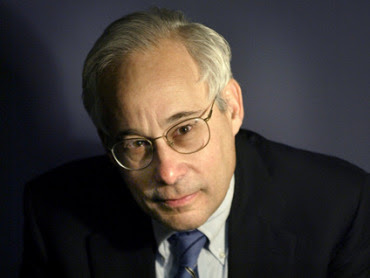 Meet Dr. Donald Berwick, recently given a recess appointment to be the Medicare/Medicaid czar.  Dr. Berwick is now in charge of a program with obligations of 95 trillion dollars (debt clock) - far, far higher than the GDP of every nation in the world.  As far as I can tell, he has zero experience with finances.  Of course, this administration has set a record for the lowest number of people from the private sector - that is, people who know what they're doing.

If you are an American citizen, your life or death in the medical system is in his hands.  If you're over 45, you are most at risk for having your life terminated by this "gentleman".

You see, Dr. Berwick is a big fan of the British National Health System.  That's novel because most of the British people are not fans of the NHS, and you have to go a long way (apparently, all the way to Harvard) to find someone who is in favor of it.  In a speech marking the 60th birthday of the NHS, he praised the it for deliberately creating scarcity: "You [the NHS] plan the supply; you aim a bit low; historically, you prefer slightly too little of a technology or service to much too much and then you search for care bottlenecks and try to relieve them."  In a time when the largest wave of retirees in US history hits the Medicare system, the fed.gov has cut the budget for the system by half a trillion dollars ($525 Billion).  The only conclusion is that life will be worse for us than for those who were in the system before us.  This is in complete agreement with the trend of this administration, which (as far as I can tell) is completely dedicated to making all of our lives more miserable.

For example, in an op ed in the NY Post in 1992, he waxed eloquent over his love for the NHS, including this gem, "At last, a nation where healthcare is a right and carrying a semi-automatic machine gun is a privilege."  Showing he knows just as little about weapons as he does economics.

What's wrong with the NHS?  Pretty much everything.  Yes, you are guaranteed a certain level of care, but your odds of surviving anything: from routine hospitalization to cancer, are much worse than in the US.  How about 1200 patients killed in a UK hospital abused by staff, lying in filth:  How about a much better chance of surviving cancer in the US System, "Researchers found that USA has the best score with 5 years of survival rate for breast cancer at 83.9% and prostate cancer at 91.9%. …UK reported 69.7% survival rate for breast cancer, …, and 51.1% for prostate cancer."  In other words, in the US, your survival chances for the most common cancers (breast and prostate) are 120% (breast) and 180% of the UK chances.  Mrs. Graybeard is a breast cancer survivor and we know many others, as well.  From here.  Do you think it's just from screening?  Not really, "In the United States, 85 percent of women aged 25 to 64 years have regular PAP smears, compared with 58 percent in Great Britain.  The same is true for mammograms; in the United States, 84 percent of women aged 50 to 64 years get them regularly - a higher percentage than in Australia, Canada or New Zealand, and far higher than the 63 percent of British women."   source data


But if the NHS system is designed to create shortages of care, how could it be otherwise?  What central planners always, always fail to realize is how good the market is at creating positive outcomes.  Berwick and other central planners think our system is too centered on the patient and should be more about social justice.  They think our system generates an over supply of medical care, raising costs.  Dr. Berwick, my wife and I went through the period when the mammogram shows something that needs to be removed and it needs to be removed now.  You can't get that surgery too fast.  How about you do us all a favor; why don't you head for Cuba or Venezuela or North Korea where your ideas will fit in much better?

The quote most often associated with Dr. Berwick has to do with the concept of rationing healthcare. In an interview published in "Biotechnology Healthcare," Dr. Berwick said, "The decision is not whether or not we will ration care - the decision is whether we will ration with our eyes open."  Remember back during the Obamacare debates, when Sarah Palin used the term "death panels" to describe the decisions that would be made to terminate some patients in order to save resources for others?  That is exactly what Dr. Berwick refers to here.

I personally find his quotes praising socialism - the redistribution of wealth - at least as alarming.  "Any healthcare funding plan that is just, equitable, civilized and humane must, must redistribute wealth from the richer among us to the poorer and the less fortunate. Excellent healthcare is by definition redistributional," said Berwick. (see at 1:40 below)  Is health insurance redistribution?  I voluntarily pay into a system that will pay benefits to any member based on the money it collects from the members of the plan.  I fail to see that being socialist.  So if insurance isn't "just, equitable, civilized, and humane" what exactly is he advocating?  Taxing you to pay for other people.  Government, as Washington said, is force.  Try not paying your taxes, and if you're not a member of the administration (e.g., Timothy Geithner), how much do you want to bet that you eventually don't get a gun pointed at you?  No, this is not humane, it is theft.

Our administration appears to be fans of the "whole lives system".  In this system, it's acceptable to let a 70 year old, die while giving care to a 25 year old, because their life is worth more to the collective - excuse me - worth more to society.  To paraphrase their quote, "it's not discrimination to deny care to the 70 year old and give it to the 25 year old.  Everyone who is now 70 was once 25 and the majority of those who are 25 now will be 70 some day".   In other words, "we can screw you now because we didn't screw you earlier; and if we're not screwing you now, wait until you're 70 and then you'll really be screwed."

Michelle Oddis, in her Human Events blog entry has this quote:


“I think anyone who is close to this understands this debate is really not about Don Berwick, but the opportunity to re-litigate the underlying health care reforms," John Rother, executive vice president for policy and strategy at the AARP told McClatchy Newspapers. "In ordinary times, the nomination of somebody with Don's record and standing in the field would not be controversial."

In ordinary times, we wouldn't have a socialist being given the reigns over 95 trillion dollars.  The AARP sold out their members in this fight and they continue to.  I assume they intend to make lots of money selling insurance to cover the shortfalls in Medicare coverage.  The take home point, though, is the vast majority of the country wants this repealed.  The vast majority would love to see it honestly litigated for the first time.
Posted by SiGraybeard at 6:47 PM