Alvie D. Zane, over at the Cliffs of Insanity posted about a wonderful score he just made.  Worth a look.  I gotta get me one of those, too, one of these days.

Things are not static here, either.  Last weekend at our local gun show, I was able to score a good used Remington 700 with a nice Leupold scope.  I don't have anything that shoots the .30-06 that my new Remmy and his Garand shoot, so no ammo on hand, but that was easy to fix at the show, as well.

Despite the summer heat, this demanded a trip to our gun club's 200 yard range to sight this baby in.  Here you can just about count out the box of 20 rounds as I adjusted the Leupold for this 100 yard target.  The stuff to the right of the Caldwell target are the first shots, and later shots move in toward the center.  Those are mostly shot two at a time. Stopped adjusting with those two just over the 10 ring.  That one at the 6:30 position was a flier on the final settings, but I knew it was "my bad" as the shot went off. 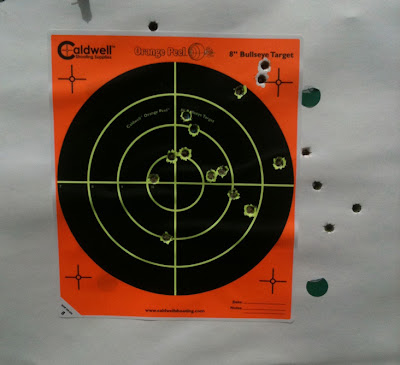 The next learning experience was to try my DPMS LR-308B at 200 yards.  I first tried shooting some MagTech .308 Win that I bought when I first got the gun, to see if it was as bad as the first time I tried shooting it at 50 yards.  First off, almost every round failed to eject.  Second, after 10 rounds, I couldn't find a hole in the target at 200 yards.  (A semi-automatic, AR-10/M1A-clone does not make nice when you try to run it bolt action).  I got annoyed and stopped shooting the MagTech, switching over to some Remington UMC from Walmart.  See that shot just "southwest" of the bulls-eye?  That was my first shot with the UMC after shooting over 10 rounds of MagTech and not even hitting the whole 12" target. 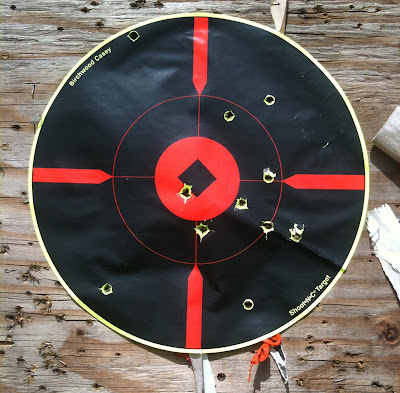 After these 11 shots, the lovely and deadly Mrs. Graybeard did a few shots at 100 yards to get a feel for it, putting a nice group just below center of the target.  We didn't even finish off the box of 20 UMC .308, mostly because another shooter wanted the range to go cold so they could go change a target.

I will note that today is only the second time in our lives we've shot from 100 and 200 yards.

My lessons learned today are the obvious ones - since semi-automatics can be fussy about ammunition, don't buy a lot of any brand until you know you can cycle it in your gun.  Anybody want to buy some MagTech .308?  There were some guys there who shoot 200, 300 and 600 yards regularly, and they were mostly shooting lighter stuff, like .243 and .223.  I understand.  I have a strawberry on my shoulder.  Time for an anti-recoil pad or shooting shirt (if I can bear the heat).

Summer is my least favorite time of year around here.  It was 92 by the time we left the range at 11 AM, with humidity nearly 90%.  But that's a whole 'nother post right there!
Posted by SiGraybeard at 3:02 PM