One of my top-of-the-pile reads is Borepatch, who writes some erudite stuff.  Today, he posted this story: about a site called "I Write Like", which appears to analyze some aspect of your writing to tell you, well, who you write like.

So naturally I had to try it. 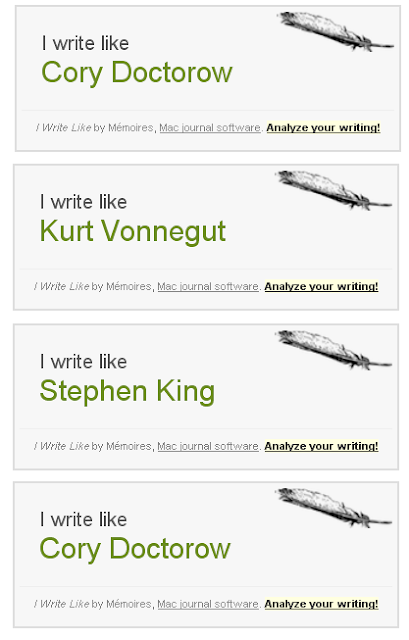 Now Mrs. Graybeard has read, and liked, some Vonnegut.  I have read and not thought a whole lot of some Stephen King.  But neither of us really knows who Cory Doctorow is.

Borepatch thinks the software is analyzing content, not style.  I did four different posts; the previous one on a day at the range, one on the atomic bomb of rhetoric, financial reform has the votes, and meet your executioner.  I think.

Speaking of the post on the atomic bomb of rhetoric, I passed a milestone with that.  I got my first SPAM.  Autogenerated, I assume.  It found my use of the name  "candidate Halit0sis" (no sense doing that again) and posted one of those sincere "I had this problem until a friend told me about gargling with velociraptor urine" or whatever.  This blog has been here since around the end of February and this is my first SPAM.  Well, except for the one from the Wolf 359 system saying it would increase my tentacle size.
Posted by SiGraybeard at 7:18 PM