Straightening Out Some of the Daily Lies

Let's get a couple of things straight, here.  Yeah, this post is going to end up with a lot of "me, me", but so what?

While I am happily a Christian (non-denominational, so leftists would automatically say "fundamentalist nut job"), I have Jewish ancestry.  My mom was born Jewish, and although her kitchen is about as Kosher as mine is, and I know much more Torah than she does, she considers herself Jewish.  I figure that's between God and her; believe me, I've tried.  My closest family was not in Europe at the time of the Holocaust; at least, none that I've ever heard of.  The first Americans on both sides of my family came in the great wave of immigration that marked the early 20th century: my mom's side came from the Ukraine and my father's side from Italy; I'm second generation.  So imagine my surprise, sitting in my mom's house, 25 to 30 years ago, when a friend comes over and I see the tattoo on her inner forearm: the familiar string of digits of an Auschwitz camp survivor.  This was a woman I knew by name for years, a friend of one of my aunts, but had not met - I was already an adult living out on my own.

Mrs. Graybeard and I have talked about how affected we were of the images from the Holocaust as we were growing up.  To this day, I almost reflexively weep at them.  I know it's not a simple step from a story like this to it happening again, but NOT ON MY WATCH.  I don't care if you're Mahmood frickin' Ahmadinejad or some pseudo-call-yourself-a-christian KKK asshole, I will kill you if it comes to that.  I stand by Israel.

A friend sent me a PowerPoint slideshow about what life was like in the 1940s, done to jaunty Benny Goodman music.  One page made me stop and shudder.  I have seen this photograph before and seeing it to Benny Goodman was just wrong.  It is extremely, painfully sad; this poor man, the "last Jew in Vinnitza" - what's he thinking?  Here he sits with his coat neatly in his lap as if he's waiting for a train, or an appointment.  He can clearly see the pile of bodies before him, so he must know what's coming, but he doesn't appear to be praying, nor crying, nor fighting for the last minutes of life.  Would you do that?  Would you sit there stoically?  If you know you're going to die anyway, would you try to at least bruise your executor?  If you're going to die anyway, wouldn't you at least try? 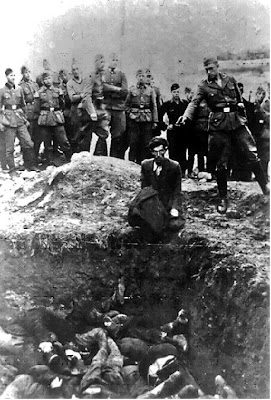 We are in a time like predicted in 2 Timothy 3: "There are difficult times ahead. As the end approaches, people are going to be self-absorbed, money-hungry, self-promoting, stuck-up, profane, contemptuous of parents, crude, coarse, dog-eat-dog, unbending, slanderers, impulsively wild, savage, cynical, treacherous, ruthless, bloated windbags, addicted to lust, and allergic to God. They'll make a show of religion, but behind the scenes they're animals. Stay clear of these people." (translation "The Message")

This is as good a description as you'll ever find of the "Social justice" crowd and black liberation theologists who are currently trying to influence public life.  There is no place in scripture that says salvation isn't a personal commitment and a personal confession to God.  That's the whole point of it!  Saying there's such thing as group salvation, as our President has claimed, is like your psychologist saying your mother is your problem, so send her in for therapy and you'll be fine.  Never quite works that way, does it?

Aren't we supposed to be charitable?  Of course!  But there's a vast, vast difference between me giving to my neighbor out of the kindness of my heart and the government taking by force (government is always force, remember?) to give to whomever they deem to give to.  In this case, it's literally the difference between Heaven and Hell.

Glenn Beck has talked about this, and drawn flack from it from people who claim to be Christian.  They are wrong and Glenn's right.  I wouldn't change my opinion on that if a well-regarded Christian scholar, like the Pope, were to come out and say Glenn's wrong, but he doesn't either.  The Pope says "social justice" is demonic.  This is life or death serious.  If your church is talking group salvation or social justice, they are deceived.  Find another church.

The social justice folks are like the people Paul wrote about in his letter to the Romans (Romans 1: 21..) "Yes, they knew God, but they wouldn't worship him as God or even give him thanks. And they began to think up foolish ideas of what God was like. The result was that their minds became dark and confused. Claiming to be wise, they became utter fools instead….Instead of believing what they knew was the truth about God, they deliberately chose to believe lies."

The entire purpose of the first amendment to constitution, the vaunted separation of church and state, is to prevent the kind of nonsense scripture they're plugging here.  Black liberation theology is Marxist at its core.  Excuse me, but the only way a white person can achieve salvation is by giving back to the colored races what we took?  First off, it shows a deplorable, stifling ignorance of history; many, many nations and virtually every group has been enslaved at some time in the last 10,000 years.  Didn't these guys ever read the Old Testament?  Second off, there isn't a person living who has injured another or been injured by another through slavery in this country - the institution was outlawed over a hundred years ago.  As I said a few paragraphs ago, my family wasn't even in this country when the "Original Sin" of slavery was being committed, and you'll find the vast majority of the rest of country wasn't here, either.

But even worse than that, when the Government provides all, it makes people dependent on them.  It makes us all slaves to the Government.  Black Liberation Theology and Social Justice movements seek to create slaves, not free men.  God wants free men and free will.  God wants individual choice and individual liberty.  They seek to create addicts dependent on the "Beneficent Government" for their very existence.  Is there a worse category of slave master?

"Socialism is a philosophy of failure, the creed of ignorance, and the gospel of envy." - Winston Churchill.

Jim Wallis, Rev. Cone (who founded black liberation theology), Jeremiah Wright, and - yes - Barack Obama, are advocating a position that has more in common with the people who ran the gas chambers and mass graves in Vinnitza than with the Pope.
Posted by SiGraybeard at 7:53 PM