Let Me Introduce One of the Scumbags

Allow me to introduce just one scumbag out of the dozen or more in the videos put out by James O'Keefe's Project Veritas.  You've seen the videos elsewhere - or you should.  They are "must see" videos.  Meet Robert Creamer. 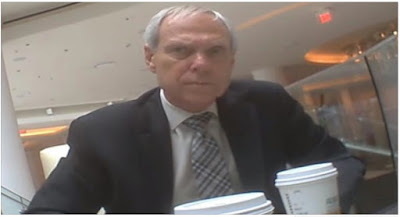 I instantly knew the name when I heard it and searched around here for what I wrote about him.  I was unable to find anything, but that doesn't mean I haven't written anything!  I've had difficulty with the search engine tool; I mean there are things I know I've written and can't find them easily.  I'm actually not sure if it's Creamer or Cramer; I've seen it written and heard it pronounced both ways, so I searched it both ways.  This article says that Wikipedia uses Creamer, and I think the preponderance of things I've seen since this story broke uses that spelling.

Getting back to the scumbag at hand, as that article says, he was a visitor at the White House so often he was practically renting a room.  The reason I recognized the name is that he's one of the handful of people "credited" with writing Obamacare long before Obama came to office; even before he started running.  In Creamer's case, he had lots of time on his hands while he was in Federal Prison during 2006 on bank fraud and tax evasion charges.  While on mandated leave from the sort of thuggery in these videos, he thought long and hard about how to destroy our health care system and make us more like Cuba or Venezuela.  In that time, he wrote a book called,  Stand Up Straight! How Progressives Can Win.   It's no secret that his goal was to make everyone dependent on the state; he says it in black letter text.  Stand Up Straight! advanced the notion that the Democratic Party could win a permanent majority in Congress by doing the following:
Just a raw lust for power over others, camouflaged as concern for SJW causes like "economic justice" and building "a consensus that healthcare is a right".   In reality, he says, “To win, we must not just generate understanding, but emotion — fear, revulsion, anger, disgust.”  If your cause is really just and not just your lust for power, why do you want to leave people in states of fear, revulsion, anger and disgust?


Many left-wingers say that Creamer’s book has inspired them in their progressive fight to turn America into socialist Europe. Creamer’s work has received support and garnered an endorsement from a surprising source. Or, maybe it is not so surprising after all. Former White House Senior Adviser, David Axelrod, described Creamer’s book as a “blueprint” for future progressive victories. Creamer has stated that in order to impose socialist healthcare on an unwilling nation, it is necessary to deceive the people.

More recently (a year ago) he was linked to helping to sell the Iranian Nuclear deal, and other pieces of leftist doctrine.  Creamer is married to Illinois Democrat (Marxist) congresswoman Jan Schakowsky, so maybe Federal Prison was a way to avoid spending too much time confined with her.

Officially, Creamer resigned his post (audio autostart warning) after the videos broke, saying “I am unwilling to become a distraction...”.  Of course this is ruling class country, and I'm sure if he's not already picked up by another left-wing group, he will be soon.  A real scumbag.