Just a couple of little things, none of them big enough to warrant a post.

Ever drop something, or misplace something, search like crazy and give up only to find that days or weeks later you find it exactly where you were looking?  I've come to think that the act of dropping something somehow creates superposed quantum states or superluminal motion.  I think what's happening is that the dropped object moves forward in time or into a parallel universe and we have to wait for the universe to catch up with it before we can see it.  I don't know why.

I had a really great example of this, while putting one of my antennas back up after the storm.  This is a dual band vertical antenna by Cushcraft called the MA8040, for the 80 and 40 meter amateur bands.  Much like the electrical design of the antenna, I had planned a simple way to raise and lower the antenna for storms, and Cushcraft offered it as an option.  Imagine two pieces of angle aluminum about 1 1/2 inches on a side on either side of the antenna and a clamp between them to surround a short piece of antenna mounting pole.  Now add a bolt to pivot around at the bottom and another six inches above to lock it in place.  Both of these are stainless bolts 3/8 or 1/2", with insulating spacers on either side to keep the antenna centered.  Pull off the wingnut on the top and the antenna is free to pivot around the bottom bolt and lie down.

I can't recall the last time I took the antenna down, but we didn't have it for the big storms in '04.  When I was putting it back up, one of the wing nuts fell into the dirt immediately below the antenna.  A search followed, but I could never find that wingnut.  Yesterday, while raising the antenna, I looked down and there it was, exactly where it should have been, under the spot it was dropped from, which is the first place I looked.  Back then, I replaced it with a plain galvanized nut, but galvanized on stainless will rust away first and it was already corroded, so I replaced the nut with the one that had been designed for that spot.  It could be the nut went only a matter of hours into the future or it could have been in a parallel universe for years; I'll never know.  I've worked around that spot many times and never seen it.


On Friday morning, while the internet was down and we were waiting for the rain to let up, I spent time working on the details of how to build the back panel and breakout board mounting bracket for the CNC controller box.  Today, I cut one of the new cutouts, then tried to set up to do the next one but failed.  The Sherline just isn't big enough to handle the 16" back panel the way I planned.  While staring at the drawing and trying to figure out another way, I think I see how.  I wasn't able to try it, but I put together a CNC file to cut it.  Tomorrow, I'll continue and see if I can get the back panel finished. 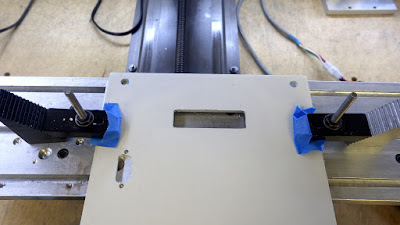 The cutout for the breakout board interconnect.

Almost two years ago, I mentioned we'd gotten a deal on one of those very portable car jump starters / battery banks.  Several months ago, I realized I had been leaving it in the car far too often and the Florida heat just isn't a good thing for batteries.  I found that it appears to be rather low in capacity.  Just running the battery down with the builtin flashlight and recharging hasn't helped, so I'm going to go for more desperate measures, and try to hit it with big current surges.  Regularly cycling your storage batteries is a good thing.  I'm also currently doing the same thing to the only NiCd pack I still have around here.    Rechargeable batteries require care and cycling techniques that depend on what kind of batteries they are.