Being Impoverished by Too Much Money

It sounds crazy, doesn't it, being made poor by too much money?  But that's exactly what's happening in all of the Western world and Japan; the money being created by the central banks is ruining their economies.

Raúl Ilargi Meijer, a regular contributor to David Stockman’s Contra Corner newsletter, explains that the “entire model our societies have been based on for at least as long as we ourselves have lived is over!”


There is no growth. There hasn’t been any real growth for years. All there is left are empty, hollow, sunshiny S&P 500 stock market numbers propped up with ultra-cheap debt and buybacks, and employment figures that hide untold millions hiding from the labor force. And most of all, there’s debt, public as well as private, that has served to keep an illusion of growth alive and now increasingly no longer can.

These false growth numbers have one purpose only: for the public to keep the incumbent powers-that-be in their plush seats. But they could always ever only pull the curtain of [The Wizard of] Oz over people’s eyes for so long, and it’s no longer so long.

That’s what the ascent of Trump means, and Brexit, Le Pen, and all the others. It’s over. What has driven us for all our lives has lost both its direction and its energy.

The feds provided the economy with an almost unlimited quantity of credit-based funny money through those Quantitative Easing programs (QE, QE2, QE3, Operation Twist and everything else).  The money was phony, but it bought real resources.  Since borrowing didn't cost anything, that led borrowers to not think carefully about how the capital was put to use, and they wasted it - or wasted more of it than normal.  Now, indicators show we're either heading into recession or we're already there.  Corporate defaults are running at their fastest pace since 2009, nine out of 10 households have lost income, and tax receipts for the last quarter fell year over year from 2015.  Adjusted for inflation, real growth in the U.S. economy – as measured by actual tax collections rather than the feds’ phony statistics – is falling.

And it's not just us.  The whole world is slowing.  Lambert Strether of the blog Corrente Wire explains:


I started following shipping… partly because it’s fun but more because shipping is about stuff, and tracking stuff seemed like a far more attractive way of getting a handle on “the economy” than economics statistics, let alone whatever books the Wall Streeters were talking on any given day.

And now we have the Hanjin [shipping company] debacle – all that capital tied up in stranded ships, though granted only $12 billion or so – and the universal admission that somehow “we” invested w-a-a-a-a-a-y too much money in big ships and boats, implying (I suppose) that we need to ship a lot less stuff than we thought, at least across the oceans.

China is in trouble because if the rest of the world isn't buying what they produce, their income drops.  If you're not exporting stuff, you don't need those ships to move it around.

With the world economies slowing because of the creation of too much cheap money, what are the central banks doing?  Do you really need to ask?  They're creating more cheap money.  Bloomberg reports the biggest central banks are bulking up their balance sheets at the fastest pace since 2011’s European debt crisis.  They're trying to boost the worldwide lackluster economies with asset purchases that are supporting stock and bond prices.

How's this supposed to work?

We had a problem that surfaced about 10 years ago.  The world had too much debt and too much capacity.  It needed the "creative destruction" of the marketplace.  In response, the central banks funded more debt and more capacity.  Remember Joe Biden saying the only way to keep from going bankrupt was to spend more money?   So the feds created fake money to give the economy fake credit… which was used to buy real resources… which were squandered.  Now we have too much debt against declining future output.

Look: economies aren't based on greed, they're based on justice.  As Bill Bonner puts it:


An economy is a moral system, after all. It is not a get-rich system. You get what you deserve, not what you want or what you expect.

Americans now are being punished. Gently, so far.

The lash will sting much more later. 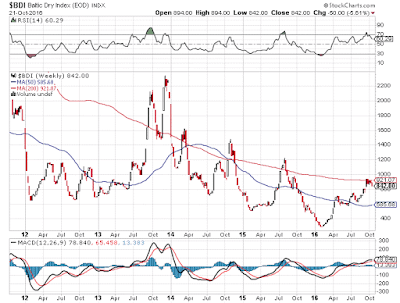 A five year plot of the Baltic Dry Index, $BDI, probably the most often quoted indicator of international shipping.  Since the spike at the end of 2014, the market has made lower highs and lower lows.  That's the definition of a market in decline.

Posted by SiGraybeard at 7:53 PM