The Convention of States

H/T to Peter at Bayou Renaissance Man for getting me thinking of this today, with his mention of Angelo Codevilla's superb piece at Claremont, "After the Republic".  Angelo is the originator of the intellectual argument that America has devolved into a self-aware ruling class that detests the people they rule over (that would be you and me), whom he called the country class.  The original article is gone from American Spectator, but my article about it is here.

The piece at Claremont is really well-conceived and worth your time to read the whole thing.  Or go back to BRM's place (first link above) and read the excerpts there.  To borrow one paragraph that summarizes some of the problem:


In today’s America, a network of executive, judicial, bureaucratic, and social kinship channels bypasses the sovereignty of citizens. Our imperial regime, already in force, works on a simple principle: the president and the cronies who populate these channels may do whatever they like so long as the bureaucracy obeys and one third plus one of the Senate protects him from impeachment. If you are on the right side of that network, you can make up the rules as you go along, ignore or violate any number of laws, obfuscate or commit perjury about what you are doing (in the unlikely case they put you under oath), and be certain of your peers’ support. These cronies’ shared social and intellectual identity stems from the uniform education they have received in the universities. Because disdain for ordinary Americans is this ruling class's chief feature, its members can be equally certain that all will join in celebrating each, and in demonizing their respective opponents.

Like many of us, I had heard of the idea of an Article V Convention of the States many years ago.  I didn't like the idea at first, under the influence of someone I read who was of the opinion that once the constitution is opened, it will be destroyed.  Who has the time to take off months or a year to go wherever the convention is held and try to ride herd over it, other than the professional protestors we see everywhere?  The hard-left, George Soros minions who show up anywhere to protest and disrupt things for a few bucks and a box lunch would show up and capture the convention.  I've come to believe that outcome can be guarded against.  I think the bar is too high for anything they propose to be a guaranteed pass, for reasons I 'll get to soon.

This Wednesday, while I was in the shop working on my CNC controller box, I listened to an hour interview with Mark Meckler, a national leader for the Convention of States, on The Glenn Beck Program.  (A radio hour, which comes down to under 30 minutes).  You may read about it and listen to the interview here (or on YouTube, if you prefer).


The Congress, whenever two thirds of both houses shall deem it necessary, shall propose amendments to this Constitution, or, on the application of the legislatures of two thirds of the several states, shall call a convention for proposing amendments, which, in either case, shall be valid to all intents and purposes, as part of this Constitution, when ratified by the legislatures of three fourths of the several states, or by conventions in three fourths thereof, as the one or the other mode of ratification may be proposed by the Congress; provided that no amendment which may be made prior to the year one thousand eight hundred and eight shall in any manner affect the first and fourth clauses in the ninth section of the first article; and that no state, without its consent, shall be deprived of its equal suffrage in the Senate.

A mock or practice convention was held last weekend in Williamsburg, Virginia.  Representatives from all 50 states were there, including 115 sitting state legislators and 22 others, such as retired, former state representatives, and others involved in this process.

1. Requiring the states to approve any increase in the national debt
2. Term limits on Congress
3. Limiting federal overreach by returning the Commerce Clause to its original meaning
4. Limiting the power of federal regulations by giving an easy congressional override
5. Require a super majority for federal taxes and repeal the 16th Amendment
6. Give the states (by a 3/5ths vote) the power to abrogate any federal law, regulation or executive order.

There's a long way to go.  Only eight states have agreed to a Convention of States so far, so 26 more are needed.  38 states are going to consider it in the coming year, which means 68% of those states need to pass a resolution before it can happen.

The way I see it, this is the only option in front of us that has the potential to restore the Republic in a peaceful transition.  I see really only two options: this road, and some sort of massive reset, probably involving millions of casualties.   There are many problems with that path, not the least of which is that we have no idea what we'll end up with.  If history is any guide, the most likely scenario would be a totalitarian dictator or strongman of some sort.  Only once in history has a revolution led to more freedoms for more people. 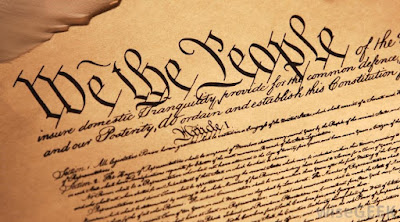 EDITED 10/5/16 to Add:  Commenter Jim did the research and found Codevilla's original article, still at American Spectator,  America's Ruling Class and the Perils of Revolution.  I highly recommend reading both Codevilla pieces on the ruling class, as well as the other background information I referenced.

While I'm here, let me correct this paragraph.  I jumbled up what I was trying to say in this paragraph so badly it came out factually wrong.