In the last week, I made some more progress on the CNC controller box.  The bottom is done and I've been testing cuts that go on the back panel with available scrap.  First the bottom: 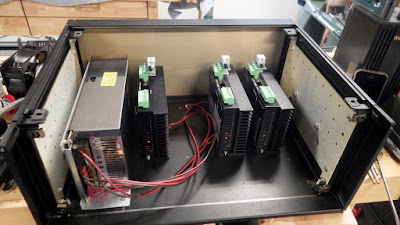 The only major part missing when I snapped this is the breakout board, which will go closest to the back (viewer) on the right.  I left a gap in the motor controllers to verify how the fourth will fit when I add it.  I later moved one over so that the empty slot is on the right.  The power supply (shiny box on the left) is held down with #6 hardware through the bottom.  Screw, lock washer and nut.  The three motor controllers are held down with #4 hardware into tapped holes in the bottom.  That was just because of the hardware I had on hand.

The back panel cutouts are hanging on the DB-9 connectors now.  I found a CNC file online that's very easy to use and did a couple of runs of it.  I had to modify it to cut in two passes and slow down the feed rates because of the light duty nature of the Sherline, but it ran with no issues.  The DB-9 outlines came out too big, though.  Here are two cutouts on a piece of scrap aluminum I had lying around.  Turns out they're over 1/8" larger than the connector.  You'd want some room around the connector shell but not that much.  (Ignore the three large round holes.  They're not part of this experiment).  This is also low grade aluminum; soft and gummy.  The chips cling to the edges of the cut and have to be filed away.  I think that's part of why the cutouts look kind of raggedy, too. 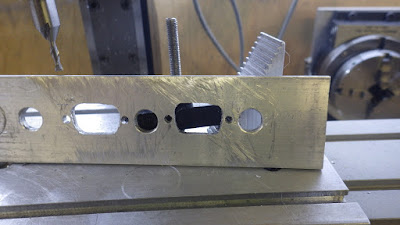 I realized that the reason the holes were too large was because the file was using cutter compensation and I hadn't set that up in the software (Mach3).  Cutter compensation is supposed to automatically move the cutter a programmed value (the radius of the cut) inside the cut line and since no entry is interpreted as "0.000", the center of the cutter ran along the lines, not its outer edge.  Which made the cutout too big.  When I added the value, the software gave me an error and wouldn't run.  I reloaded the original file (without my changes) and got the same error, which means the original file is the problem, not my edits.

This led me to decide to just code one up myself. I used a 1/4" EM instead of 1/8" and don't sweep the cutter in arcs in the corners. I just move the cutter from corner to corner and the radius of the cutter creates the curves in the corners.  At least that's the plan.  Do to other goings on around here, I didn't get to try out the code.  I'll run that tomorrow.  I do have to change cutters to drill the 1/8" holes on the ends, but that doesn't really require CNC.  Just change the bit once the work is located.

As I say every time I post about the project, I work on this some amount virtually every day.  Always trying to learn new things and solve a new puzzle.