Dude, You Hung the Sign Around Your Own Neck 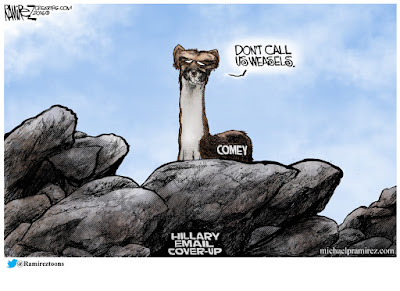 You remember.  The guy who made the FBI a laughing stock to so much of America said they weren't weasels; they were honest and fair.


"You can call us wrong, but don't call us weasels," he told the House Judiciary Committee. "We are not weasels, we are honest people and we did this in that way."

He added that the investigation was carried out without giving Clinton special treatment, with the bureau adhering to strict policies while conducting the probe.

"We do not carry water for one side or the other. That's hard for people to see because so much of our country we see things through sides," he said. "We are not on anybody's side. This was done exactly the way you would want it to be done. That said, questions are fair, feedback is fair."

In your own statement you said "To be clear, this is not to suggest that in similar circumstances, a person who engaged in this activity would face no consequences. To the contrary, those individuals are often subject to security or administrative sanctions."  If that isn't the definition of unfair, what is?

You hung the weasel name tag around your own neck.  Don't get mad at us for using it.

I know several people who stop by here have commented that they have or had access to kinds of classified materials that were mishandled. Do you think you would have been treated like Hillary if it had been you? Comments please. I'm already on record here saying I've had such access in the past, and I firmly believe I would not have been treated that gently.