The Rocket Engine Nobody Understands Getting Verified

It's called an EM Drive, where EM is short for electromagnetic.  It's a spacecraft thruster developed by a single inventor, Roger Shawyer, and it's looking poised to revolutionize some aspects of space travel.  Think of 10 weeks travel time to Mars, instead of around 8 months.  Originally, scientists refused to acknowledge it could work because of two glaring, incredible, differences between the EM Engine and conventional engines.

It requires no chemical or nuclear fuel; no propellant at all.  It doesn't use exhaust in an action/reaction system like conventional engines.

Let me point out it does require fuel in the sense of an electric supply.  It is not a "something for nothing" situation that would immediately be dismissed as a "perpetual motion" machine, violating the laws of thermodynamics.  But electrical power isn't something that's terribly hard to design into spacecraft; designers can use solar cell arrays, or even radioisotope thermal generators (RTGs).   The electrical power is used to run a microwave power source - the same frequency as microwave ovens, 2450 MHz - and the microwave power is dumped into a sealed cavity that's wider at one end than the other.  This generates thrust outside the cavity by some seldom-utilized properties of physics. 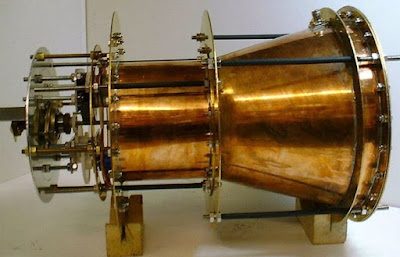 The EM drive engine, photo from the UK company, SPR Limited, that appears to be at the center of it all.  It looks like a conventional engine except for two things: there are no obvious fuel pipes on the left, and what would be the exhaust bell on the right is sealed.

The fact that engine produces thrust is relatively easy to verify, and has been verified by labs that have studied it.  Among the groups studying it, the Chinese Academy of Sciences built a model and verified that at an input power of 2.5kW, their EmDrive thruster provides 720mN of thrust.  (720 milliNewtons isn't much thrust, but in the vacuum of space and running continuously, it can be a small, steady acceleration that can have a big effect).  NASA's paper is set to be released soon.  A paper in the journal Advances in Physics concludes it produces thrust in the same way as any other engine, using the electromagnetic energy in the cavity (referring to the energy as particles, photons, and not waves) .


We consider the possibility that the exhaust is in a form that has so far escaped both experimental detection and theoretical attention. In the thruster’s cavity microwaves interfere with each other and invariably some photons will also end up co-propagating with opposite phases. At the destructive interference electromagnetic fields cancel. However, the photons themselves do not vanish for nothing but continue in propagation. These photon pairs without net electromagnetic field do not reflect back from the metal walls but escape from the resonator. By this action momentum is lost from the cavity which, according to the conservation of momentum, gives rise to an equal and opposite reaction.

The narrator here is AIP author Arto Annila.  Notice in this summary (from the abstract) there's no mention of how the thrust becomes directional.  Later in the paper, they say the asymmetry of the cavity directs more photons in one direction than other, causing the thrust.  In the original UK Mail article, they include an explanation that invokes a seldom-referred-to effect of general relativity.


Mike McCulloch of Plymouth University came up with a possible explanation based on a new theory of inertia.

The Unruh radiation effect states that if you're accelerating in a vacuum, empty space will contain a gas of particles at a temperature proportional to the acceleration.

According to McCulloch, inertia is the pressure that the Unruh radiation exerts on an accelerating body.

When the accelerations involved are smaller, such as is the case with the EmDrive, the wavelength of Unruh radiation gets larger.

At extremely small accelerations, the wavelengths become too large to fit in the observable universe.

As a result, inertia may only take on whole-wavelength units over time, causing it to become 'quantized.' This means it can only in some multiple of a unit of measure, causing sudden jumps in acceleration.

But because of the EmDrive's truncated cone, the Unruh radiation in tiny.

The cone allows Unruh radiation of a certain size at the large end but only a smaller wavelength at the other end, according to an in-depth report by MIT.

This means the inertia of photons inside the cavity change as they bounce back and forth. To conserve momentum, they are forced to generate thrust. 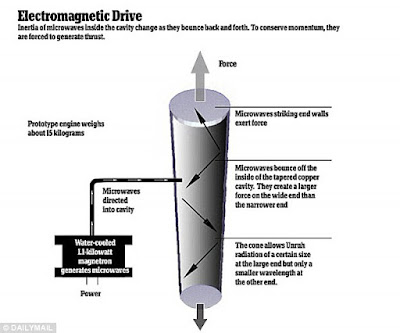 This is a really interesting development.  I came across the EMDrive a while back but frankly didn't know what to make of it.  Now that it has been verified to produce thrust by several independent labs and the theoreticians are starting to develop models that explain how it works, things look up for it.  The inventor filed a patent (pdf warning) on an improvement to it, using a superconducting plane in the engine to improve efficiency.  The EMDrive has the potential to completely revolutionize the satellite industry.  Currently, satellites use small thrusters rated around one Newton - about the same size as the thrust EMDrive thrusters can generate.  (SPR says that a thruster like the one the Chinese Academy built, 750 mN, if deployed on the ISS, would easily provide the necessary acceleration to compensate for orbital decay, thus eliminating the need for the reboost/refueling missions.)  Satellites carry fuel which can be the ultimate life determinant for a mission.  The EMDrive can convert that to larger solar panels and microwave transmitter, giving potentially much longer life.  Right now, satellites in the Geostationary Orbit are out of reach of any known way to repair.  What if a satellite could be slowed down by constant light thrust from an EMDrive until it's in low Earth orbit and reachable by technicians on orbit?  Of course, the idea of using that constant low level thrust to speed trips to Mars is rather interesting, too.