A close approximation of my worst case ramblings about Hurricane Matthew appears to be playing out.  We're under hurricane watch with warnings expected in the morning.  I've been hanging back and not doing much in the way of preparing until tomorrow.  I'll decide if I'm putting the shutters up and taking the antennas down in the morning.  That will depend on how stable the track is looking.

The current forecast has us well covered by the "cone of uncertainty"; we've been covered since the 5PM forecast yesterday.  This is the 10/5 @ 0000 UTC forecast map.  We're now in the white part of the forecast cone, the first 3 days.  Of course the forecast gets more accurate the less they go into the future.  ("It's 8 PM and the storm is right there.  At 8:05 it will be in the same freaking place.")

The bump on the east coast of Florida is Cape Canaveral; I'm south of the tip of the Cape by about 20 miles and about 4 miles from the Atlantic, on the mainland, not the beach island.

A direct hit from a Category 4 hurricane is scary, especially since almost everything we have that's "hurricane rated" is for 150 MPH winds.  On the other hand, the most likely scenario is that it stays about 50 miles off the coast, and the forecast strength is down a little from the current 140 MPH winds.  If it follows the track in that plot, we should get winds around the definition of hurricane: 75 MPH.

So since I'm waiting around, I've been in the shop!  (What else?)  I ran a test of the DB-9 file I was talking about last night and it still came out bigger than I thought looked good.  It seems my connector is smaller than the size I had the drawing for.  So I reduced the size and tried it again.  Came out fine.  This is it with the too large pattern, and the connector mounted in the right sized cutout.  It's another piece of scrap I had with a few extra holes, but plenty of room to put in the DB-9.  The connector, BTW, comes with different hardware, so these #4 screws are just to test the hole placement.  And hold it for the picture. 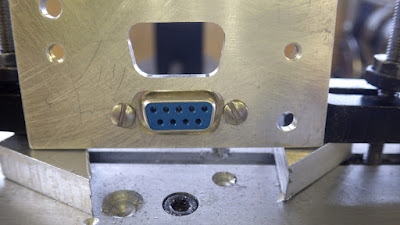 With the connector cutout refined and ready, I went ahead and modified things to put the panel on my Sherline.  I located every connector with a ruler and square, but then went back and moved them to a common spacing.  Since the first two were 2.6" apart, I made them all 2.6" apart (scientific, huh?).  I'd cut one, change to the drill bit to drill out the holes, then "G00 X2.600" (do a rapid movement 2.6" to the right), change the X/Y coordinates to 0,0 and run the file again.  It went pretty rapidly, once I had the steps clear in my mind; each cutout took about four minutes.  And wah-lah: 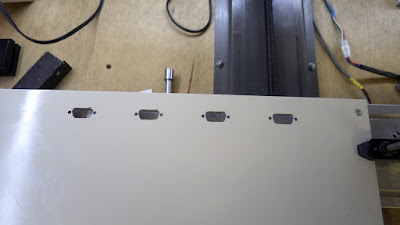 There's a little glitch in the upper right corner of the left two cutouts.  I missed a a line when I corrected the file to make the cutout smaller.  I fixed it for the right two.

Depending on how the next few days progress, it might get spotty around here.  Miguel, who is about 200 miles south of me, has checked out already.  Last time we had hurricanes ('04) our power wasn't out more than 36 hours.  Our power was back on while neighbors literally across the street behind us didn't get theirs back for another day.  No guarantees, but we're apparently more prepared than many. I can't understand why anyone would want to spend the day before the storm rushing out to buy lumber, bottled water, or any "storm supplies".