Now That That's Over With

It has been a long day for us.  I only got about 3 hours of sleep last night, after setting an early alarm the day before to get the final preparations done.

The hurricane story in a nutshell is that when I last posted, the forecast was for the storm to come ashore very close to the city I live in, Melbourne, while packing winds of a high Category 3 to Category 4.  I even heard the normally-rational Joe Bastardi of AccuWeather saying (going from memory), "The last measured central pressure in Matthew was 936 millibars.  The definition of a Category 5 hurricane is 926, and the storm is intensifying, so we could be looking at a Category 5 storm at landfall".   None of this is within a light year of being "good news".  All of it was wrong.

On the other hand, there were encouraging words to be found.  The storm seemed to be starting an eyewall replacement cycle, and had two eyewalls; one about 8 miles in diameter and the other closer to 60.  With the center less than 15 hours from the coast, that could lead to a period of weakness that never gets followed by intensification because there just isn't enough time.  There were infrared satellite photos showing the storm had been sucking in dry air, a sure hurricane killer.  Then there was word that the storm was tracking east of the predicted path, putting the worst winds farther offshore.  This comment in the Central Florida Hurricane Center, was posted by a retired professional meteorologist and former Chief Meteorologist for Boeing.


Well I'm thinking no landfall at all. When I briefed EM yesterday I felt that it would stay about 30 miles offshore. I've been plotting all of the recon center fixes since 09Z and they have all been about 15 miles to the east of the forecast track that I used in the briefing - so I sure hope that the trend continues. That would put Matthew about 45 miles offshore east of Melbourne at about 07/1130Z.  [I believe EM here is Emergency Management - SiG]

Amid all that, I noted the Thursday night forecast from the Melbourne NOAA weather forecast website - the local guys - and made fun of them.  I mailed this to my Daughter in Law (who had been pestering me to evacuate).


Tonight
Hurricane conditions expected. Showers and possibly a thunderstorm. Some of the storms could produce heavy rain. Low around 80. North wind 25 to 30 mph increasing to 45 to 65 mph. Winds could gust as high as 80 mph. Chance of precipitation is 100%.

Friday
Hurricane conditions expected. Periods of showers and possibly a thunderstorm. Some of the storms could produce gusty winds and heavy rain. High near 83. West southwest wind 45 to 65 mph decreasing to 35 to 40 mph. Winds could gust as high as 80 mph. Chance of precipitation is 100%.

"Hurricane conditions expected... Some of the storms could produce heavy rain."  or  "...could produce gusty winds and heavy rain".   Gee... do ya think?

More to the point of this post, the highest winds they forecast were 65mph, which "could gust as high as 80".  That's not even a category 1 hurricane; gusts don't count.

The local guys and that one comment were right.   I grabbed this screen capture of the Melbourne radar loop at 5 this morning.  This is the closest Matthew came to us.  I could believe that eye center is 45 miles from the coast, about 2 1/2 hours ahead of that 07/1130Z estimate. 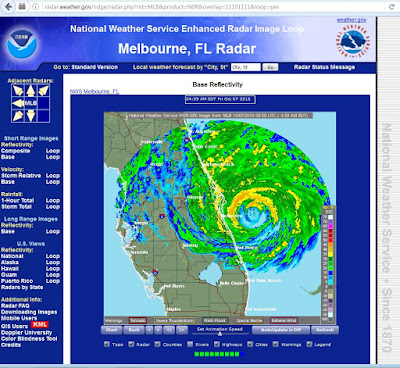 I was awakened by intermittent power outages about 2:45 this morning.  I immediately noticed the wind was the worst it had been in the storm, but also noticed it didn't sound remotely as strong as the Category 3 hurricanes we had in '04.  I never really got back to sleep except for a few minutes at a time and got up for good around 4:15.  By that time the power had been out for some time and my backup generator was running outside.  The cable/internet went out around 7AM.  Both regular power and the cable came back around 4:30 this afternoon.  We got outside and started the cleanup process around 2, and except for a couple of small squalls moving through were able to work outside for a couple of hours and get the cleanup accomplished.  Most of the cleanup.

Hurricanes are a messy pain in the ass.

While I don't think we had any damage whatsoever from the storm, some of my neighbors were not so lucky.  Going either direction out of my front door, there are two trees down within three doors.  In one case, it blew away from the house; in the other it fell across part of the garage.  The local fish wrapper newspaper has plenty of pictures of people (places) that didn't do as well as we did.