We Were Just Talking About the Samsung Galaxy Note 7

Just the other day.  Today, the US Department of Transportation banned the phones from air travel.  No one will be allowed on a commercial air flight with a Note 7 as of Noon Eastern time today, October 15.


The phone will not be allowed on the plane in any form; passengers cannot have it in carry-on luggage or checked baggage on any flight that goes to or from the United States.

Airlines have not allowed passengers to operate or charge their Note 7 phones for weeks, as many of the smartphone's users reported that the devices were catching fire and, in some cases, exploding. A smoking Galaxy Note 7 forced a Southwest Airlines flight to evacuate earlier this month. A formal recall followed, and Samsung has since discontinued the phone and offered full refunds or exchanges to anyone who still has the Note 7.

Does this make sense?  I don't think it makes much sense.  Here's why:

To begin with, the number I quoted Wednesday of .01% defect rate is based on the US Consumer Product Safety Commission's data (92 bad phones) mixed with some data from around the world (another 20).  That's dated 9/15, a full month ago, and I don't know that anyone really knows the total number.  Additionally, as a comment from reader Able said, other phones might catch fire, too, at an unknown rate.  Every manufacturer uses these lithium-polymer batteries, and every manufacturer is trying to get every minute of battery life out of them they can.  To quote another comment from reader Arthur, "Is Lithium, is not safe".

I think we can assume an upper limit for how dangerous these phones are by taking the highest number we can assign for the failure rate and multiplying by 10 to 0.1% defect rate.  With 1 million phones out there (CPSC data), that would turn into 1000 bad phones out there somewhere.  How many of those 1000 are likely to be flying on any given day?  One?  Ten?   Wouldn't it be just as practical to find anyone flying with a Note 7 and issue them one of these for the flight?  Those would be pretty good way to contain a phone that's got a battery catching fire.

In the commercial avionics world, boxes are supposed to have lower failure rates than 0.1%, and there are special requirements for non-flammability, non-propagation of a fire, and other things.  Passengers' phones and other electronics aren't commercial avionics and can't be expected to meet those standards.  The same goes for every other phone or item of personal electronics someone takes on a plane.  A 30 cal ammo can is cheap insurance and making it temporarily standard on passenger flights sure makes sense to me.  Several users have posted pictures and video of the supposedly fireproof boxes Samsung is sending out.  It's just four layers of cardboard.  A 30 cal ammo can has got to be better than that. 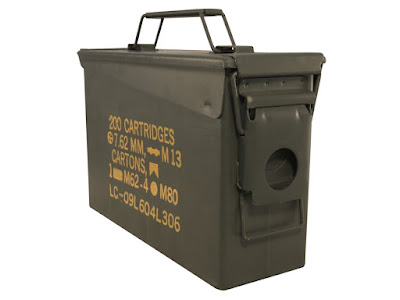