Out of Our Hands, Now

Well, the shutters are up, the antennas are down, and everything that can be made safe has been.  We're going to lose our freshly planted tomatoes and winter veggies, but there just isn't much we can do about that.  The hurricane forecasts have had Matthew on top of us since late Tuesday.  We've had occasional hours of good news, from the standpoint of weakening the storm, but the chances of it staying well offshore are long gone.

I hope it was clear when I said, "I'll decide if I'm putting the shutters up and taking the antennas down in the morning.  That will depend on how stable the track is looking.", that the decision to not put up shutters would be if the track moved away from us.  If the track stayed where it was or ventured closer, the shutters were going up.  Here's a comparison where I tacked the Tuesday night track next to the one they just put up: 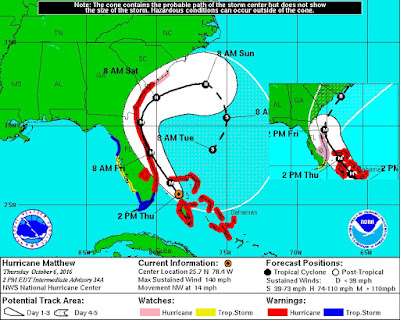 That "8AM Fri" location on the bigger plot looks to be directly over my house, as accurately as one can read those things.  As you can see, the Tuesday track kept it offshore for the entire forecast period, while today's map (and, really, Wednesday morning's) show it riding up the coast from here.  The only things that would improve our chances are if it goes very far offshore, which isn't likely, or if it should come ashore earlier and either ride the coast longer, or better yet, move farther inland.  Both of those would serve to weaken the storm.  The morning forecast showed it hugging the coast more, but that went away a few hours later.  Also note that they now think the storm will weaken and loop back for another run at south Florida.  We could conceivably get it twice

Depending on how the next 30 hours progress, it might get spotty around here.  Like I said before, the last time we had hurricanes ('04) our power wasn't out more than 36 hours.  Our power was back on while neighbors literally across the street behind us didn't get theirs back for another day.  Some places were out for weeks.  Those were two category 3 storms, which this might become, if we're lucky.

So wish us luck or send your prayers.

Posted by SiGraybeard at 2:40 PM