Chapman University is out with their survey of the things Americans fear most.  It makes an interesting read or skim, especially in light of the election.  All the data are here. 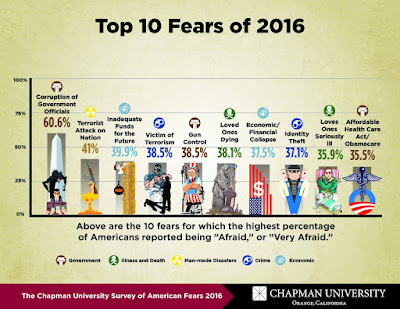 Head and shoulders above all the other fears in the list is corruption of government officials.  It gathered almost 50% more responses than the number two, while from number two through 10, it's only a 15% difference.   Government corruption was number 1 last year as well.  With the possible exception of the number three fear, not having enough funds for the future, it's easily arguable that the top five fears are all fear of the government mismanaging the country.  I would say that all five of the top five fears are in the government's lap because if they weren't constantly messing with the economy through the horrible deficit spending and the execrable central banks, it would be much easier to plan for having enough money for the future.  A terrorist attack (numbers two and four) are in the category of defense.  In fact, out of the top ten there are only three that aren't in the government's lap: fear of loved ones dying or getting seriously ill (five and nine) and fear of identity theft.