Remember the early February story of the guys walking into a police station open carrying rifles?  Widely criticized as epic-level stupidity, epic failure, the story goes that these guys walked into a Dearborn, Michigan police department station openly carrying rifles and handguns, because they had been hassled while open carrying on the street and wanted to protest that their civil rights were violated. I think every gunny site I read essentially summed this up as "how stupid can you get?"

If today's Daily Caller can be believed, the story is not at all what we've been fed.

Here's the story that I think we've all heard:


Brandon Vreeland, 40, and James Baker, 24, were arrested Feb. 5 after the younger one, clad with a black ski mask, walked into the police department with a short-barreled rifle strapped to his chest, and a semi-automatic pistol tied to his waist, according to the Detroit Free Press.

Vreeland left his gun in the car so he could videotape the encounter as an experiment to see if police would respect the Second Amendment rights of the U.S. Constitution. Both have previously said they are legal gun owners, and that Michigan law allows them to carry their weapon openly, including in a police station.

According to their lawyer, though, there's more here than that summary implies.


The men allege that police knew of their arrival because of a fake Facebook account that was used to track their activities. Officers reportedly had their guns drawn before Baker and Vreeland reached the precinct.

“After the discovery, it is very clear that Dearborn (police) knew that they were coming, knew who they were, and planned the ambush,” said attorney Nicholas Somberg, who represents Vreeland, according to the Detroit Free Press. “It’s not that they were reacting to a situation they thought was going to be violent. They actually knew it was not violent, knew who they were, and just wanted to teach these guys a lesson.”

[Note: I believe phrase "After the discovery" refers to the stage in a trial called Discovery, in which the two sides question each other about the evidence they're going to use. ]

Fake Facebook account?  Being used by the police for surveillance of gun owners and activists?  The story morphs quite a bit from emphasizing the "admirable restraint" the police showed in not shooting them on sight.


Somberg alleges that not only did his client and his associate do nothing illegal, but the police were acting in a wrongful manner. He says documents show that police created a Facebook profile with the name “Olivia” and scanned publicly posted conversations on the social media platform.

“My clients have other activist friends,” Somberg said. “They have a whole network, so they’re just screen-shotting everybody.”
...
Vreeland was charged with carrying a concealed weapon, assaulting/resisting/obstructing a police officer and disturbing the peace; Baker was charged with two counts of carrying a concealed weapon and one count of brandishing firearms in public.

“We audit police to see how well they honor the Constitution and people’s rights,” Vreeland said after posting $1,500 bond. “We showcase police abuse and abuse of police power in the totalitarian police state that we live in.”

Sounds a bit different from the original "two open carry idjits walk into a police station ... all open carry guys with rifles are idjits". 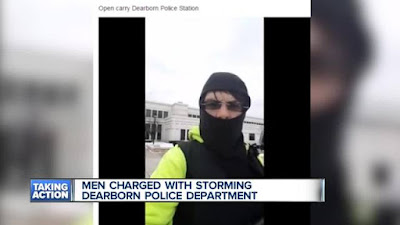 (the video that Vreeland filmed was shown widely; this screen capture is from WXYZ.com)

And in case you missed the point the other 9 gazillion times it's been made, you have no expectation of privacy on Facebook - or other social media.    Likewise, in case you missed it the other 9 gazillion times it has been reported, the Fed.gov regularly passes rules and laws saying what they can't do, and just as regularly completely ignores those laws.  Like the BATFE, for example.