A friend sent me this link to a collection of post cards depicting the Ford factories in 1917.  It's worth your time to go take a look.  According to the collection of cards itself, Ford Motor Corporation was founded in 1903.  From the 1903 founding until September of 1904, they sold 1708 cars.  In 1917, they planned to produce a minimum of 700,000 cars, an increase in capacity of over 409 times.  Over 8 doublings of production, so doubling production in less than two years, eight times over. 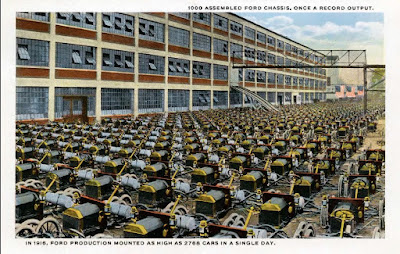 It's a cool collection of pictures.