This is about this summer's coming solar eclipse, now being hyped as America's Eclipse or The Great American Eclipse, now five months away as of last Tuesday.

The vast majority of the people on earth go through their lives without seeing one due to the combination of small area that they cover and infrequent appearance.  I haven't seen a total eclipse, yet, although I've seen several partial eclipses.  What's unique about this eclipse is how much of the population of the US is within a day's drive of the eclipse path.  If it's within your ability to get there, I'm told it's a uniquely beautiful experience.

What prompts this posting is some talk on Survival Blog about getting protective eye wear, and the chance of eye protection becoming impossible to find as we get closer to the eclipse.  As a lifelong amateur astronomer, I thought I'd pass along some thoughts.

To begin with, you know that the most basic safety instructions tell you not to look at the sun with your naked eyes, and Never Ever EVER with binoculars or a telescope without proper filtering.  Hopefully, everyone old enough to lift binoculars knows that.  That said, I'll bet that you've had the same experience I've had of having to drive into or otherwise look close to the sun in the sky.  It's painful.  You won't want to do it, and you don't have to do it.  In fact, looking at the sun, with the exception of the few minutes of total eclipse will not be your emphasis.

The easiest way to look at the eclipse as it's progressing toward totality is with a pinhole viewer.  This doesn't have to be fancy; it's simply a box with a pinhole on one end.  A shoe box will do fine.  The pinhole will project an image of the sun onto the far end.  It will be bright enough to observe in daylight.  Something like this is a fancy way to do it:

You can achieve the same results with a couple of pieces of thin cardboard; put a pinhole in one and hold it in front of the other at arm's length.  A box leads to less arm strain.

You don't have to do this.  Any thing that cast shadows with a hole in it will project mini-eclipses where the sun shines through, and this is one of the cool aspects of watching an eclipse.  If you're near a tree, everywhere sun shines between the leaves, you'll be seeing images of the eclipses.  When totality is close, the holes between the leaves of a tree will project hundreds of crescent sun images. Have you ever seen a Ritz cracker used to project 7 images of the sun through the 7 holes in the cracker? 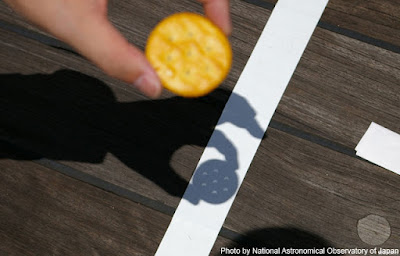 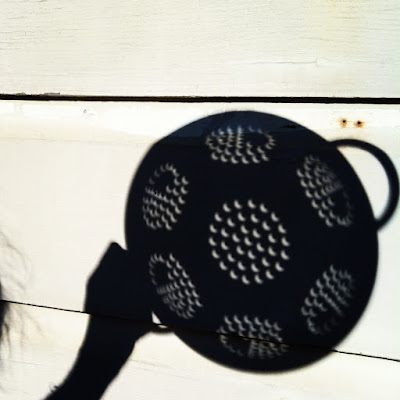 If you're bringing binoculars, (you're not going to look through them without proper filters, right?) you can project magnified images on the ground.  Attach the binocs to a photo tripod, with bungee cord if need be.  You'll get better contrast if you cut holes in a piece of cardboard to put on the binoculars so that there's some shade where the images are being projected.

The commenters on Survival Blog were recommending #14 welding glasses, like these, which are known safe.  When you're wearing them, you will see nothing but the sun (at least, not much other than the sun).  Survival Blog pointed out that these may be unobtainable as we approach the eclipse.  I believe these are about $12 more than the last time I looked, but that time they were out of stock.  At this higher price, they're still available.

You'll see cheap plastic film "sunglasses" like these, for a buck or two now and probably going up in price as the eclipse gets closer, or something like these.  The maker, Thousand Oaks Optical, is one of the well-regarded optical companies that knows what they're doing.  The film is a neutral density filter that transmits less than .001% of the light through it.  Yes, they're cardboard and flimsy, but you'll use them once and can put them over your glasses.  If it's up your alley, get one of these sheets and think of how many little viewers you could make out of 100 square inches of that film!  Sell them on the side of the road, or wherever you go to watch the eclipse.  A 10" square sheet like that can be used as a full aperture filter for a big amateur telescope, but I'll bet if you have such a scope, you already know that.  I have a 12" diameter filter made of that material that I built for my telescope back before I had metalworking tools.   I cut two 12"ID rings out of 3/4" plywood and mounted the film between the two rings.  It fits over the tube of the 10" reflector I built.

As totality approaches, it will get progressively darker, like evening approaching at midday.  If you're on a hill with a good view to the west, the direction the moon's shadow is approaching from, you may be able to see totality coming as the shadow races toward you (the speed varies, but can be several hundred MPH).  The instants before totality starts and when it ends are often characterized by what's called a "diamond ring" effect and Baily's Beads  where sunlight shines between peaks on the moon's limb.  Now you'll put down your solar filters or dark glasses, telescopes and anything else you've brought and just watch it.  You'll see whatever stars and planets are above the horizon that time of day.  Animals will go quiet, and birds stop singing.  You'll see the Sun's corona, one of the rarest sights on Earth because it's not visible to the eye at any other time.  Given the low level of solar activity we've been having, it will probably just be streaming away from the sun evenly in all directions.  I've seen so many "enhanced" or photographically stretched pictures that I have no idea what to expect. 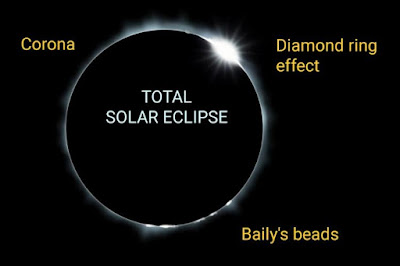