These reports are more or less weekly.  Most of what I've done in the last week is continuing in the path of tweaking and optimizing.  The portion that took the most time was to finalize the oil pump situation.

The first issue was that the oil bottle was sitting a few inches above the floor, while the pump was on the back of the chip tray two feet above the bottle.  This caused a problem getting it running.  When the pump was off, the oil drained out of the oil lines back into bottle and it would take 4-5 minutes to get it flowing at the mill.  I didn't have anything handy to put the oil bottle on, so I built a little wood box to hang off the base cabinet out of scraps of the half-inch plywood that the chip tray was made from.  I attached the pump to the box, so that now the oil level in the bottle will never be below the pump inlet.  The oil never drains out of the pump now, and it gets oil to the ways within a minute of starting.  Let's be "worst case" and say it takes two minutes. 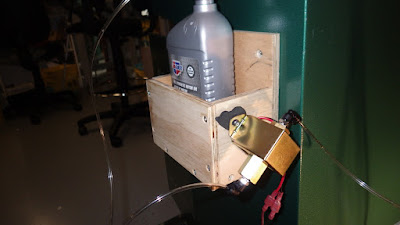 As I said last time, I have no plans to run the pump under CNC control, I just want to flip a switch and have it dispense some oil.  The next step was to make a housing to hold that switch for the PC power supply that runs the oil pump.  Turns out I had a nice metal box that I bought 30 years ago for a ham radio project that never got built.  The main difference between this box and the one I documented for the CNC controller is that I didn't machine anything on this one, nor do any 3D modeling.  I cut out the back panel with a jigsaw and a file.  It's ugly.  It looks like a rat gnawed out the hole, or that Royal Nonesuch made it, but it's a box.  Here it's sitting on an empty kitty litter bucket.  With two cats and a prepper mindset, we have a constant stream of these 34 pound buckets coming to the house.  The UPS guy has grown to hate us. 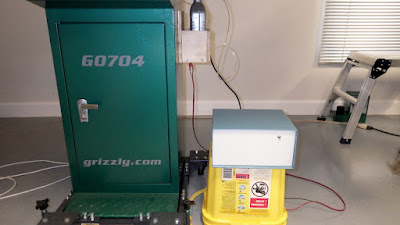 Now here's a tactical mistake.  I didn't seal the base of the mill where it sits on the chip tray, or where the bolts go through the chip tray before I worked on the oiling system.  I opened that cabinet and there was a small puddle of oil in the back right corner.  After cleaning everything up, I sealed all the bolts with RTV.  It seems to have worked.  I've added more RTV and caulk around the base.

The thing I've done with the biggest impact is reach the decision to implement a misting cooling system, as I mentioned thinking about last time.  To be honest, the choice between misting and flood cooling is one of those areas that isn't very clear.  The big pros are all using high pressure flood coolant, and water-soluble oil mixes are common.  Since the pros use it, that itself is going to cause some hobbyists to copy what they do (just like there's a run on whatever gun is the new hotness because the SEALs use it).  You will find references to rust being caused by these systems, and other folks saying "no problem".  On the other hand, the pros use multi-horsepower (or hundreds of HP) spindles and I have a 1 HP spindle.  The big guys might force coolant down the center of a long drill bit at thousands of PSI, while I would just peck drill - drill a couple of bit diameters and then pull the bit, repeat.  It just doesn't seem terribly relevant to the hobbyist.  I see the occasional comment from someone who claims to be a professional saying that for hobby-class machines, flood cooling just doesn't buy much compared to even manually spraying or brushing on a lubricant.  (If you like tool videos, and haven't seen this one that Og posted, you should watch it.)

The two big names in mist systems appear to be Fogbuster and Kool-Mist.  Fogbuster's claim to fame is to use bigger droplets and produce less fog that gets inhaled.  Kool-mist claims their mist gives lower overall costs to use.  Both claim to cool well and improve tool life.  Both require compressed air.  Uh-oh.  I have a compressor, and it's both loud and doesn't hold much air (it's a pancake style, 3 gallon tank).  Fogbuster requires 10-15 PSI, while Kool-Mist requires around 50 PSI.  Fogbuster's small system is ~$350-ish and Kool-Mist is around $150, but there are homemade systems, since they're not terribly complicated.  The advantage to Fogbuster is that 15 PSI sounds more like a home airbrush compressor and those should be designed to be quieter than what I have.

Right now, I'm leaning toward Fogbuster, but I'm still looking.  Fogbusters are sold by Tormach, which is a bit of an endorsement, but Kool-Mist is carried by Amazon.  I haven't ruled out trying to design a system and make it from scratch either.  As long as it doesn't become a project like the mill itself was.  I'd still rather make my other projects than the tools.