I Don't Get the Whole "Repeal and Replace" Bit

My version goes like this.  Picture your doctor telling you that you have a tumor that's destroying your {insert organ name here}.  Then he tells you the treatment is to remove it and replace with a different tumor.  Who wouldn't say "WTF???" to that?

Why should we want to replace it?  Why wouldn't we just want to burn it to the ground and do everything we can to create a free market in medical care?   From what I can see, the problem with healthcare is over regulation and a thoroughly broken market because of it.  This brokenness has been building for over a hundred years.  Naturally, anything that took a hundred years to break is going to be hard to unscrew. 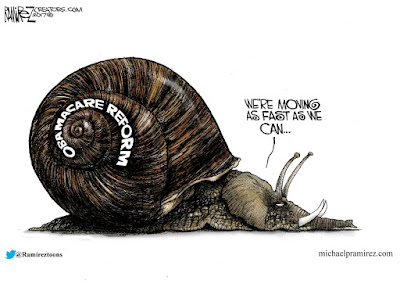 (Michael P. Ramirez cartoons). It's going to feel this slow no matter what, but the Stupid Party pulled a major stupid by passing House bills to end Obamacare over 40 times, but not bothering to have a backup plan ready to drop in place.  It's not like they haven't known since November 8th that Trump was going to be president and this was high priority.  Obamacare wasn't written after he was inaugurated, it was written in advance; parts of it years in advance.  It was deliberately and strategically made hard to repeal.

The stunning reminder to me of how fubar everything is was in a short story about California Senator Kamala Harris on the Blaze.  There have been reports that the coming reform cuts federal payments for Medicaid.  It boils down to this astounding statement.


But according to Harris, the Medicaid rollback would be detrimental to Californians because “1 in 2 Californian children depend on Medicaid,” the junior California senator tweeted Friday.

Half of the children in California are on Medicaid?  Half?!?  I don't think you could find a bigger indictment of California or of Democratic policies than that.  Unlike Harris, I don't define success as having half the population on welfare.  Success is getting them off welfare. Something needs to be done for those children, but is the solution to enlarge the welfare state or direct efforts to getting them out of poverty?

Few people alive today have any memory of a working healthcare market; even fewer than the number of people who can envision a world without constant inflation.  There was a great interview last week, on Tucker Carlson's show in which the guest, Steven Weissman, former president of Palm Springs hospital in Hialeah, Florida, was making this point about the market being broken and nobody being able to know the prices for procedures or tests.  Go watch that video.