I've spent pretty much all of yesterday and today modeling the enclosure for my CNC mill in my 3D CAD program, Rhino3D.  There was other work interspersed with it, but not as much as I'd like.

The problem is that the design isn't really documented on the DVD I bought.  There are glimpses here and there and some descriptions, but most of the information is spread between online forums and YouTube videos.  I got the material list from one of the forums and bought the hardware, but other than some rough guidelines, didn't have dimensions to cut anything to.  So it came down to drawing it up and counting hardware.  (There are things in this image besides the mill and enclosure.  It's just like leaving stuff lying on the floor in real life.) 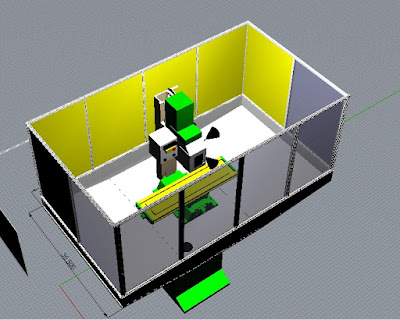 I had the drawing for the wooden chip tray that has been shown here before, and was able to get a CAD model for the extrusion from the place I bought it, Misumi.  After that, it was a lot of calculator work, and design on the fly.

Then it was time to try to find sources for things like the plastic panels.  When I found I couldn't get the corrugated plastic I wanted for the original design with three panels, I changed it over to four panels today. The back panels and two of the side panels, seen in yellow here, will be white plastic.  The smokey/translucent panels will be clear plexiglass.  The four panels on the front are hinged on the ends and in the first seams, which are doubles of the extrusion.  The double extrusion in the middle is where the doors open and close.

There's still lots to figure out, probably as I'm building it.  The upper rim of the back and sides will have some LED strip lights like these to get some light into the work area.  It's not very well lit in that corner of the shop, so the more light the better.  I'm not quite sure how to hook that up, either, if I want to be able to disconnect them to take off a side panel or something.

Oh, yeah.  I hear the president was in town today.  Missed seeing or hearing Air Force One, and if I had been sitting in line all day, this would be very different. We were outside waiting for the SpaceX launch when they scrubbed.