Just A Coincidence, I'm Sure

Reporting on Liberty Unyielding, Hans Bader updates with some numbers out of Illinois.


The Daily Gazette and Sauk Valley Media provide the example of Hopper’s Poppers:


After a little more than 2 years downtown, Hopper’s Poppers – the business, and the building it’s in – are being put up for sale, the owner said. Ryan Hopper also closed his Sycamore shop this week, citing Gov. J.B. Pritzker’s approval of a statewide $15 minimum wage increase. Three months ago, he and his wife Stephanie were considering adding a third location in Roscoe, which would have brought him closer to his five-location goal. But he said the the minimum wage hike and Illinois’s notoriously high property taxes solidified the decision for his family to continue their business ventures outside Illinois.

I'm sure there's no cause and effect relationship between raising the minimum wage and minimum wage jobs going away, just as I'm sure it has nothing to do with the same things happening in New York City, as we reported on Feb. 22 or Boston as we reported on January 11 or Seattle before them.  That's just Hatey McHaterson talking.  Like Jon Miltimore of the Foundation for Economic Education who noted about New York:


Restaurants tend to operate on famously low profit margins, typically 2 to 6 percent. So a 40 percent mandatory wage increase over a two-year period is not trivial.

In response to the minimum wage hikes, New York City restaurants did what businesses tend to do when labor costs rise: they increased prices and reduced labor staff and hours.

New York had the worst decline in restaurant jobs since 9/11 as their increased minimum wage laws hit.  Several other states have passed or are in the process of enacting a $15 pay floor. New Jersey recently enacted a $15 minimum wage — the increase will be phased in over several years — joining California, Massachusetts, and New York. The Maryland House of Delegates passed a $15 minimum wage on February 27. The District of Columbia and some cities, such as Minneapolis and, as mentioned, Seattle also have $15 minimum wage laws.

As I've said at least a dozen times, I really hate this argument, for a variety of reasons.  The biggest reason is that we keep telling the people demanding the raise that jobs will go away or hours will go down so that they might well end up making less than they are now if they're the ones still working, and they'll face higher prices for everything they buy: and then we're right and they ask for the bad thing to happen again.


Politicians have admitted that these radical increases in the minimum wage make no economic sense, even if they make for a moralistic political soundbite. In signing California’s $15 minimum wage into law, California’s Jerry Brown said that, “Economically, minimum wages may not make sense. But morally, socially, and politically they make every sense.”

Key word: politically.  It will keep his people in power.  Back in 2016, a poll of Californians said that they knew the $15 min wage law would hurt them personally and hurt the state's economy, but they wanted it anyway.  FN.  How does something that hurts everyone it purports to help get to be "wanted anyway"?  Virtue signalling.


The Los Angeles Times reported that “Californians strongly back the state’s minimum wage increase to $15,” even “though they believe the wage hike will hurt their pocketbooks and the state’s economy,” and “high percentages of those surveyed expected negative consequences, including layoffs and business relocations to states with lower minimum wages. Almost 90% of respondents believed that prices for consumers would rise because of the wage hike.”

Over 70% of economists said the $15 wage was a bad idea.  More than that said it would increase unemployment.  Moody's estimated that 160,000 jobs would be lost - in California's manufacturing sector alone.

I see a lot of human suffering here.  In the name of supposedly getting people closer to a living wage, we're going to cost some of them their jobs and ruin their lives.  For everyone who struggled, went to night school or special training to get a job well above the min wage, like $12 or $13/hr,  we're going to drag them into a compressed band just above min wage, negating what they've done to better themselves in life.  We're going to cost the entrepreneurs their livelihood and their future plans.  We're going to disrupt everyone's lives.  All for political virtue signaling. 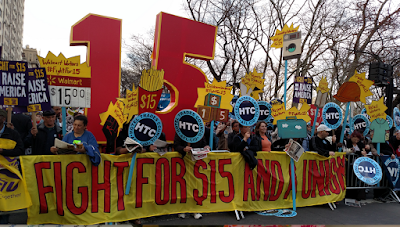