When Boston's Durgin-Park opened in 1827, restaurant, John Quincy Adams was president of the United States.  The restaurant and the city have seen lots of changes in the intervening 192 years, but the owner says they can no longer make a profit with the prices they can charge and workers were told last weekend that the restaurant will be closing tonight.


According to Ark Restaurants CEO Michael Weinstein, the restaurant wasn't profitable anymore. He says business has been down about 30 percent over the last five years. Weinstein says the dwindling head count, increase in minimum wage and health care costs, the expensive upkeep of an old building and competition from the growing Seaport District were all factors in the restaurant's downfall.

That collection of reasons for shutting down the well-known restaurant can be summed up as "increasing costs, decreasing income", a combination that can squeeze any company to death. The Daily Signal singled out the increasing minimum wages in the city, citing a recently passed law that raised the minimum wage from $11 to $12 an hour on Jan. 1, and will further increase it to $15 by 2024.  It's hard to rule that out as being a factor, and the combination of increased minimum wage and health care costs from Obamacare surely were a big factor.


Certainly, the restaurant business is tough, regardless of minimum wage laws. There are a number of reasons one would close.

However, there’s no doubt that the mandated increase in wages can have harmful consequences to business owners and workers alike. That isn’t because of petty meanness. It’s the bad policy, regardless of intentions.

It turns out the consequences of those bad policies don’t just fall on business owners. They fall on workers, too.

The national “Fight for $15” movement has been going on for years and I've been writing about it all along.  Study after study has shown that these laws hurt the people they're claiming to want to help the most, and time after time when some city does it the results are what the the studies say will happen.  A 2017 study in Washington studied how Seattle's mandated minimum wage increases were hurting these people.


... the “wage increase to $13 reduced hours worked in low-wage jobs by around 9 percent, while hourly wages in such jobs increased by around 3 percent. Consequently, total payroll fell for such jobs, implying that the minimum wage ordinance lowered low-wage employees’ earnings by an average of $125 per month in 2016.”

Losing $125 month is a $1500/year decrease in pay when they got a raise, along with more people losing their jobs as employers relocated out of the city where the law didn't apply. Losing $1500/year when you're on the very bottom of the wage ladder (the definition of minimum wage) is quite a smack in the face.

Similarly, a study in 2015 that I summarized here showed that as minimum wage went up the percentage of teens working those jobs went down.

There have been many studies that show adverse effects of a high minimum wage.

Almost six years ago, I wrote that I'm so tired of this issue that it's hard to even write about it, and I'd already written several pages on it by then, the third year of this blog.  In essence, those of us who oppose federal wage control like minimum wage laws always predict that it's not actually going to help people.  The laws are passed, the predicted bad things happen, and the answer is always to raise the minimum wage higher which causes even more trouble.

It's like watching an imbecile sticking a metal fork in the wall outlet over and over.  You tell them, "don't do that - you'll get hurt", you watch them do it, get knocked over by the power, then they wobble back to stick the fork in the outlet again.  All you can do is warn them, and you get tired of warning and not being listened to.  Repeat this forever. 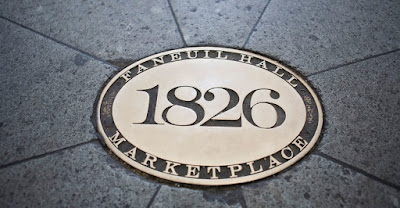 The marketplace where Durgin-Park is located has this placard outside.