A Milestone Day in the Shop?

In the comments to my last post on my CNC threading project, commenter John suggested that instead of making my own dead center that I use something like broken drill bit.


Or, if you have a broken off drill bit, chuck it in a drill, then spin it against a grinder or belt sander to put a point on it.
Slide your Jacobs chuck into the tailstock and stick the drill bit into the Jacobs chuck. A quick and dirty dead center.
Yes, it isn't heavy duty, but cutting threads in to thin rods isn;t heavy duty either.

As luck would have it, I didn't have a broken drill bit, but I had something conceivably better: a broken #1 center drill.   One end was broken off, so I chucked the good end into a drill and ran it against some heavy sandpaper and a file to dull it.

As before, I did preliminary cuts to length and diameter for the threaded portion on my manual lathe.  Then I drilled the center to give my modified center drill a place to hold the screw. (Should have done that first!)  Transferred everything to the CNC lathe, set my length dimension, and started the program.

Bingo.  First pass success.  After I pulled the threading cutter and dead center out of the way, a nut threaded on easily and felt the same all along the length. Unlike the others I've done, it didn't feel different along the length - too tight at the far end and too loose near the chuck.  My last couple of attempts needed a wrench or nut driver to start and then threaded by hand.  This one had proper fit by hand all along. 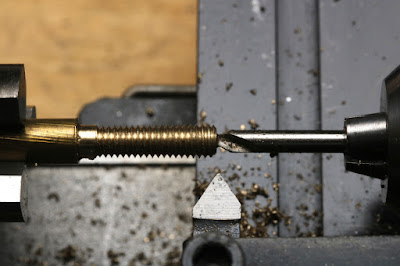 Sharp eyed viewers will notice that the my brazed carbide cutter's tip broke off, so the search for new threading bits has become a bit more urgent.  I need to get some good cutters, before I try other experiments.  I'd like to cut some more different screws in different pitches and different materials, including \a steel alloy or two.

I can conceive of things I might want to do that this isn't adequate for.  The smallest threads I've cut are #4; the untrimmed diameter of this dead center is 3/64 or 0.0469.  A #2 screw is .064, so that should still work as long as it's not too long.  Still way short of Jerry Kieffer territory.  Jerry is known for inventing ways of cutting screws that were unheard for scale models.  Things like bolts under .010 in diameter with 340 turns per inch.

A real cool "end state" to shoot for would be what's called a chucker lathe.  (Example video)  That would move the entire process from rough stock to finished threaded part onto one CNC lathe.  Conceivably put a piece of rough stock in the lathe, load one program, and make the screws.  It's just that as a way of making parts for a model, I've never made more than a couple of anything.  And that was either one with a couple of practice pieces, or a replacement for one I screwed up.  On the other, other hand, there sure are a lot of duplicate parts in a V-12, aren't there?