Medium Future Crunch, the folks who created last year's story about the 99 Reasons 2017 was a Good Year is at it again, reprising the story with 99 Good News Stories You Probably Didn't Hear About in 2018.  I think I'm going to borrow my introduction to the story I used last year, because every word rings true again.


Before I go much farther, I have to say that I don't think much of this.  There's too much odor of Hippy to it - celebrating some bad fortunes in the fossil fuel industry for one - and they seem to be completely in favor of big government interventions that always seem to bring more unintended consequences than actual improvement.  On the other hand, they point out some real contributions to making the world a better place, mostly brought to you as usual by doctors, research scientists, and, yes, engineers.

Nevertheless, there is good news here and some things to bear in mind.  For example, last year's story led with news of the unveiling of a vaccine against cholera.  It has gone into the field.


1.  25 million doses of a new cholera vaccine were administered globally, and preparations began for the largest vaccination drive in history. UNICEF
2.  India registered a 22% decline in maternal deaths since 2013. That means on average, 30 more new mothers are now being saved every day compared to five years ago. The Wire
3.  Ghana became the first country in sub-Saharan Africa to eliminate trachoma. In 2000, it threatened 2.8 million people (15% of the population) with blindness. Devex
4.  After five successful, annual rounds of large-scale, school-based deworming across Kenya, worm-related diseases have fallen from 33.4% in 2012 to 3% today. Evidence Action
5.  They report progress against malaria across the globe.  The WHO certified Paraguay as having eliminated malaria, and Tanzania revealed that in the last ten years, it has reduced the malaria death rate by 50% in adults and 53% in children. Borgen

Some of the stunning results have been in economic quality of life areas;


6.  Quietly and unannounced, humanity crossed a truly amazing threshold this year. For the first time since agriculture-based civilisation began 10,000 years ago, the majority of humankind is no longer poor or vulnerable to falling into poverty. Brookings
7.  The UNDP released a new report showing that 271 million people in India have moved out of poverty since 2005, nearly halving the country’s poverty rate in one decade. Times of India
8. The Economist revealed that global suicide rates have dropped by 38% since 1994, saving four million lives, four times the number killed in combat during the same time.
9.  The International Energy Agency said that in the last year, 120 million people gained access to electricity. That means that for the first time since electrical service was started (1882), less than a billion of the world’s population are left in darkness.
10.  Bangladesh revealed that it had reduced its child mortality rate by 78% since 1990, the largest reduction by any country in the world. Kinder-World
11.  Respiratory disease death rates in China have fallen by 70% since 1990, thanks to rising incomes, cleaner cooking fuels and better healthcare. Twitter
12.  The share of black men in poverty in the United States fell from 41% in 1960 to 18% today, and their share in the middle class rose from 38% to 57% in the same time. CNN

Good news was never common in newspapers or other media, but I had never heard more than one or two of these stories.  Today we live in a world where the media, desperate for attention and clicks, puts up every outrage story they can manufacture (occasionally, they're even real stories) and society seems to be one strange sound away from losing it.  The same author at Medium tells a story about an event in London on Black Friday of 2017 when there was a massive panic attack in the city.


Londoners’ worst fears had been confirmed. In a city primed for terror, it was a familiar feeling. Memories were fresh of attacks on Westminster Bridge, parliament, on London Bridge, at Borough Market, and on the tube at Parson’s Green. As one onlooker described afterward, “What went through my mind immediately was ‘It’s Black Friday in Oxford Circus in a city that’s had incidents,’ and as I ran, I was too terrified to look back because I thought I would see a car heading towards us.”

Except there was no car.

There was no incident.

No terrorist attack, no bomb.

It was all a misunderstanding.  The whole thing began as pushing/shoving match on an underground platform.  As people near the fight backed away, they pushed into others packed tightly into the space.   Nobody could see or hear what happened. Each person picked up on the fear of the person next to them, and it became scarier the farther it traveled from the epicenter.  I believe the conditions it takes for crowds to act this way, always expecting an attack, are the result of the previous attacks and the way they were responded to, including click-bait stories.

At our cores, we're designed to keep an eye out for a predator looking to pick us off for a meal.  The people in London reacting with a panicked "run away!" was the reaction of a prey animal when a predator is sensed.

There are lessons for all concealed weapon carriers here. 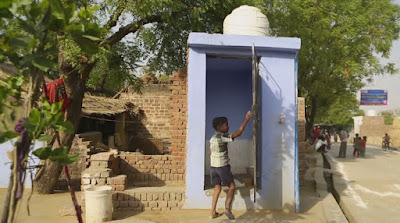 (India also continued the largest sanitation building spree of all time. More than 80 million toilets are estimated to have been built since 2014.)